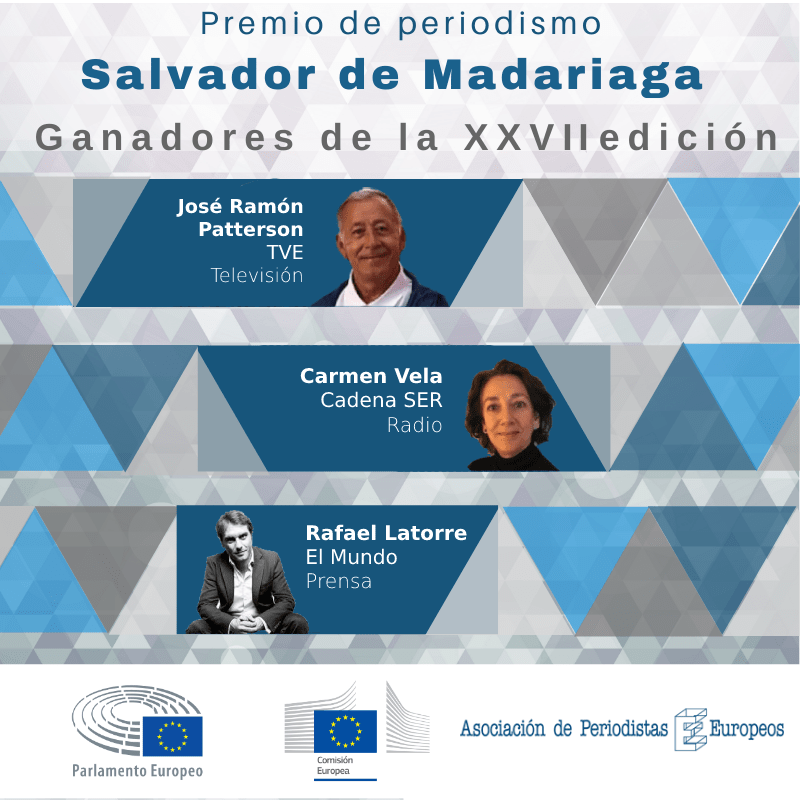 The jury decided to award the prize in the television category to José Ramón Patterson for his ability to explain Europe at a crucial moment for its future. He also pointed out that this award “represents the recognition of a solid trajectory in information and in the defense of an autonomous and professional project of RTVE wherever it has been: from Asturias to Brussels, passing through Torrespaña. The Madariaga is the finishing touch to this work”.

In the radio category, the jury highlighted Carmen Vela’s extensive journalistic career that has led her to report on the European Union from the main capitals of Europe. “In Brussels, Berlin or Paris, her chronicles have always been marked by rigor and a deep knowledge of the functioning of the European Institutions and the centers of community power, always looking for the consequences and implications for Spain, a fundamental aspect in the work of a correspondent”.

In the written press category, Rafael Latorre was awarded the prize for “the quality of his analysis, the brilliance of his opinion and the pro-European values that filter naturally into his columns and chronicles”.

The deliberations of the jury of the 27th edition of the Prize were held at the headquarters of the European Journalists Association on April 14 under the chairmanship of Ana Palacio, former Foreign Minister and former MEP. The jury was composed of: Diego Carcedo, president of the Association of European Journalists; Íñigo Alfonso, director of RNE’s “Las mañanas”; Rubén Amón, columnist for El Confidencial and contributor to Onda Cero; Jorge Bustos, opinion editor of El Mundo; Montserrat Domínguez, deputy editor of El País; Francisco Fonseca, former director of the European Commission Representation in Spain; Carlos Franganillo, presenter of TVE’s Telediario 2; Javier García Vila, director of Europa Press; Araceli Infante, director of Espejo Público of Antena 3; Ana Núñez-Milara, journalist of Vozpópuli and former correspondent of Tele 5 in Brussels; Rafael Panadero, head of international affairs of Cadena SER; Encarna Samitier, director of 20 minutos; Antonio San José, journalist and partner of Kreab and Jose Antonio Zarzalejos, columnist of El Confidencial. María Andrés, director of the European Parliament Office in Spain; María Ángeles Benítez, director of the European Commission Representation in Spain; and Miguel Ángel Aguilar, secretary general of the Association of European Journalists, acted as secretaries without vote.

The prize, consisting of a diploma and 12,000 euros in each category (written press, radio and television), is awarded annually by the Association of European Journalists, the European Commission Representation in Spain and the Madrid Office of the European Parliament. It rewards the work of media professionals whose work allows to form a public opinion about the European Union contrasted and under solid information bases.

The award ceremony will take place at the Carlos de Amberes Foundation in Madrid on a date to be determined in June and will be sponsored by Iberdrola.