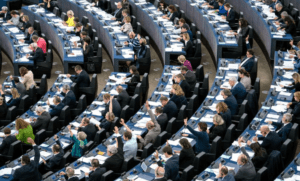 What was the European Parliament like during its 2014-2019 term? Find out some interesting facts ahead of the European elections on 23-26 May that will shape the next Parliament.

Less than half of the MEPs that arrived in July 2014 were new to the Parliament. Some 51.5% had served as MEPs previously. Greece had the largest proportion of new MEPs at 90.5%.

Plenary sessions are the pinnacle of MEPs’ work, when they vote on legislation and debate topical issues. During the 2009-2014 term there were 260 days of plenary amounting to 2,160 hours. From July 2014 to December 2018, MEPs had already attended 255 days of plenary totalling 2,187 hours of sittings.

How long it takes to pass legislation

Most legislative acts in this term were adopted at first reading, taking an average of 18 months. If a legislative act had to go to a second reading, the average length of the procedure increased to 39-40 months.

However, the number of representatives from national political parties has been steadily growing. In the 2004-2009 term there were MEPs from 168 national parties, at the start of the current term that number had risen to 191 and by end of March 2019 there were members from 232 national parties.