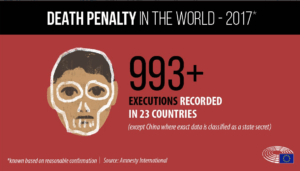 The opening ceremony of the 7th World Congress Against the Death Penalty will be held in the European Parliament in Brussels on 27 February.

The official opening ceremony will take place in the European Parliament’s hemicycle on Wednesday 27 February at 10.00. It will gather MEPs, high-level guests including EU Foreign Policy Chief Federica Mogherini and Belgian Foreign Affairs Minister Didier Reynders, and various governmental and civil society representatives to reflect on positive efforts in the abolition movement and address what future work must be done to convince retentionist nations to abolish the death penalty.

The ceremony will also feature a panel of Ministers of Justice from non-abolitionist countries, as well as video messages from UN Secretary-General António Guterres, Robert Badinter, former Minister of Justice and a driving force behind the abolition of the death penalty in France in 1981, and Pope Francis. See detailed conference programme.

An exhibition (The Great Witnesses of Abolition) and sculpture installation (Chaise LXB) will be displayed in the Menuhin Hall in the European Parliament’s Paul-Henri Spaak building from Monday 25 February to Friday 1 March.

The European Union and its member states oppose capital punishment and its abolition is an explicit requirement to join the EU.