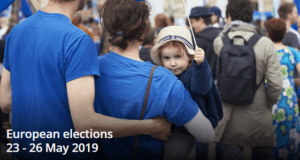 In September 2018, as part of the State of the Union, President Juncker proposed measures to bolster European democracy and protect free and fair elections in Europe.

Ahead of the European elections, Commissioner Vera Jourová has written to national political parties calling on them to ensure transparency of political advertising, to be ready to face cyberattacks and to respect European data protection rules during the campaign.

The package of measures  adopted in September aims to bolster European democracy and protect free and fair elections in Europe. It includes a series of actions addressed to national and European political parties and foundations. Today, the Commission calls on national parties to ensure transparency of the sources and amount of campaign funding for online activities during the upcoming European Parliament election campaigns.

Following the European Parliament elections in May, the Commission will prepare a report, including on the implementation of the Elections’ Recommendation, based amongst others on input from the political parties.

In September 2018, President Juncker presented the Elections package to better protect our democratic processes from manipulation by third countries or private interests. This came as a response to challenges posed by online campaigning and to threats observed in recent elections and referenda directed at discrediting and delegitimising elections in Europe. It includes a set of measures which aim to increase transparency in online campaign activities, assist stakeholders in the application of data protection rules in the electoral context, improve coordination between responsible national authorities and among Member States at the European level, and introduce the possibility to impose sanctions for the illegal use of personal data in order to deliberately influence the outcome of the European elections.

The European Parliament welcomed the package in its Resolution on the Facebook-Cambridge Analytica case adopted on 25 October 2018. The Council of national Ministers set out detailed expressions of support and commitments to action on the part of the Member States in its Conclusions on securing free and fair European elections of 19 February 2019.

Responding to the Recommendation, Member States have established national networks to formalise cooperation among national authorities to jointly identify threats and gaps, share good practices, and exchange on how to apply electoral rules online . These national networks have met twice at a European level as the election cooperation network, assisted by the Commission, to share expertise and best practices among the Member States including on threats, gaps and enforcement, most recently on 27 February. The next meeting will take place on 4 April.