The European Commission has today adopted a Decision enabling Member States to temporarily waive customs duties and VAT on the importation from third countries of food, blankets, tents, electric generators and other life-saving equipment destined for Ukrainians affected by the war.

This measure, which was requested by Member States, will apply retroactively from 24 February 2022 and will be in place until 31 December 2022.

In the wake of Russia’s unprovoked and unjustified invasion of Ukraine, more than 14 million people, or 30% of Ukraine’s population, are estimated to have been displaced. More than 6.2 million Ukrainians made their way to the EU, and nearly 8 million had to flee their homes but remained in Ukraine. This is putting a lot of pressure on Member States, which need to provide humanitarian assistance to large numbers of persons fleeing the war, while also supporting internally displaced Ukrainians at risk of hunger and disease.

The duty and VAT waiver applies to goods imported by:

Today’s Decision comes in addition to the new VAT rules adopted in April, which allow Member States to extend this exemption to domestic supplies of goods and services, including donations, for the benefit of disaster victims. 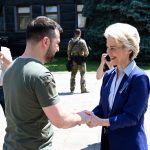