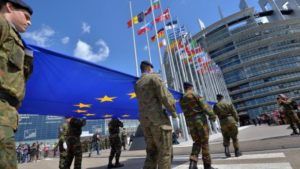 At the meeting held in Brest (France) on January 13-14 and chaired by the High Representative and Vice-President of the European Commission, Josep Borrell, the foreign ministers of the EU Member States discussed the foreign policy and strategic security of the European Union.

The Strategic Compass, to be adopted in March 2022 and covering the time horizon 2025-2030, was presented to EU defense ministers on November 16. In a world that is increasingly challenging European interests and values, we need to unite and develop a common European response. The Strategic Compass:

The holding of this meeting coincided with the massive cyber-attack on several Ukrainian government websites, including the Cabinet of Ministers, the Ministry of Foreign Affairs, the Ministry of Education and the Emergency Services department. The Ukrainian Security Service sees “some signs” of involvement of hackers associated with Russia.

In response to this cyber-attack, the High Representative of the European Union made last Saturday, January 15, an institutional declaration stating that “The European Union and its Member States are in contact with Ukraine and stand ready to provide additional and direct technical assistance to Ukraine to remedy this attack and to continue to support Ukraine against any destabilizing actions, such as increasing its resilience against hybrid and cyber threats.”

On Saturday, January 15, the EU High Representative also held a telephone communication with U.S. Secretary of State Antony Blinken, in which, as reported by the European External Action Service, both representatives rejected the Russian initiative to rebuild spheres of influence in Europe and underlined their determination to continue intensive consultations on this and other issues between the United States and the EU, presenting a strong, clear and united transatlantic front.

High Representative Borrell and Secretary Blinken reaffirmed their support for Ukraine’s sovereignty, independence and territorial integrity and stressed the need for Russia to de-escalate and fully implement the Minsk agreements. They reviewed ongoing preparations for deterrent measures and a strong international reaction with massive consequences for Russia in the event of any further aggression against Ukraine.

They also repeated that the EU and the US remain open to dialogue with Russia, but never at the expense of the freedom, sovereignty and independence of the members of the transatlantic community and its partners, nor at the expense of respect for fundamental values and relevant international obligations.

The foreign ministers of the EU Member States agreed on Friday in Brest to further strengthen coordination with the United States, with NATO and to improve the European Union’s cooperation within the OSCE, and tasked the Vice-President for Foreign Affairs with coordinating these activities.

Statement by NATO Secretary General on cyber-attacks against Ukraine

Last Friday, January 14, the NATO Secretary General stated that NATO has been working closely with Ukraine for years to help strengthen its cyber defenses. NATO cyber experts in Brussels have been exchanging information with their Ukrainian counterparts on ongoing malicious cyber activities. Allied experts in the country are also supporting Ukrainian authorities on the ground.

In the coming days, NATO and Ukraine will sign an enhanced cyber cooperation agreement, which will include Ukraine’s access to NATO’s malware information sharing platform. NATO’s strong political and practical support to Ukraine will continue.