The Council recently adopted conclusions on Turkey’s drilling activities in the Eastern Mediterranean. 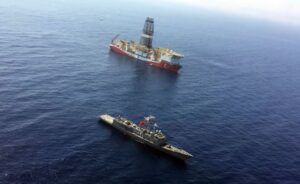 Despite repeated calls from the European Union for Turkey to end its illegal activities in the Eastern Mediterranean, the country has continued its drilling operations in the west of Cyprus and has started a second drilling operation in the north-east of Cyprus in Cypriot territorial waters. The Council reiterated the serious negative consequences that such illegal actions have immediately for the overall relations between the EU and Turkey. Furthermore, the Council again called on Turkey to refrain from such actions, to act in a spirit of good neighbourliness and to respect the sovereignty and sovereign rights of Cyprus in accordance with international law.

On the one hand, the Council, while welcoming the invitation of the Government of Cyprus to negotiate with Turkey, notes that the delimitation of exclusive economic zones and continental shelves must be addressed through dialogue and negotiation in good faith, in full respect of international law and in accordance with the principle of good neighbourliness.

The EU remains fully committed to supporting the UN-led initiatives to work with the parties to create conditions conducive to the resumption of negotiations on a comprehensive settlement of the Cyprus problem. In this context, the Council stressed that it remains indispensable for Turkey to commit itself to and contribute to such a comprehensive settlement, including its external aspects, within the framework of the United Nations, in accordance with the relevant UN Security Council Resolutions and in line with the principles on which the EU is founded and with the acquis.

Furthermore, and in view of the continued and renewed illegal drilling activities by Turkey, the Council decided to suspend the negotiations on the Global Air Transport Agreement and agreed for the time being not to hold the Association Council and the subsequent meetings of the EU-Turkey High Level Dialogues. The Council also approved the Commission’s proposal to reduce pre-accession assistance to Turkey for 2020, and urged the European Investment Bank to review its lending activities in Turkey, in particular as regards sovereign debt backed loans.