The European Union has adopted a new €18 million programme to support stabilisation work in areas liberated from Da’esh by the Global Coalition in north-eastern Syria. The new programme will contribute to the provision of basic services, such as water supplies and demining, within the governorates of Raqqa and Deir Ez-Zor. 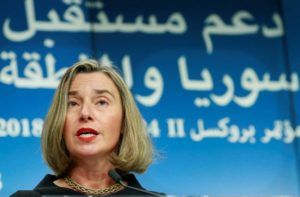 The war in Syria, one of the worst humanitarian crises the world has faced since World War II, continues to have devastating and tragic consequences for its people. It is also having an increasingly destabilising impact on the wider region, through the displacement of people, the exacerbation of political and sectarian differences and the spread of terrorism.

Therefore, the European Union aims to establish a new line of economic aid. This program is funded under the Instrument contributing to Stability and Peace and will complement on-going humanitarian and stabilisation efforts by the European Union, EU member states and other partners from the Global Coalition. Established as an EU instrument to support stabilisation initiatives and peace-building activities in partner countries, the Instrument contributing to Stability and Peace (IcSP) funds activities in the areas of:

IcSP activities are implemented in partner countries around the world, in conflict zones, in post-conflict environments and in emerging crisis settings. IcSP actions thus contribute to an integrated approach to conflicts, one of the main objectives of the Global Strategy for the EU’s Foreign and Security.

High Representative/Vice-President Federica Mogherini said: “The European Union has always been at the side of Syrians. Since 2011, we have mobilised around €17 billion to help Syrians affected by the conflict and their host communities. In accordance with the commitments taken during the Third Brussels Conference, we are stepping up our engagement to address humanitarian needs and support stabilisation in the areas liberated from Da’esh. This work is essential to allow the local communities to go back to live in safety and we will never withhold our support to the Syrian people.”

As the conflict in Syria has entered its ninth year with continued suffering and a dire humanitarian crisis, the liberation of provinces in north-eastern Syria from Da’esh by the Global Coalition constitutes an important step towards eliminating the threat of the terrorist organisation in the region and remains a priority for the European Union.

EU response to the Syrian crisis

Instrument contributing to Stability and Peace