It will be harder for terrorists to get hold of the ingredients needed to build home-made explosives under new rules making their way through the European Parliament. 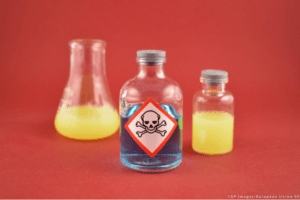 The EU has taken several measures to prevent terrorist attacks and is now updating rules regarding chemicals that can be used to create home-made bombs.

Home-made explosives have been used in the vast majority of terrorist attacks in the EU, including those in Paris in 2015, Brussels in 2016 as well as Manchester and Parsons Green in 2017. The chemicals to produce them, known as explosives precursors, can be found in a number of products, including detergents, fertilisers, special fuels, lubricants and water-treatment chemicals.

The EU is strengthening rules regulating who and how these substances can be purchased as part of the package of measures against terrorism and criminality. However, as these chemicals also have legitimate uses, it is this important to ensure that people such as farmers, miners and firework manufacturers can still use them.

Current rules date from 2013 and restrict sales of substances such as hydrogen peroxide and nitric acid. The rules have helped to decrease the availability of explosive precursors but have several weaknesses.

Currently licencing and registration systems differ considerably between EU countries. The new regulation will set up common EU rules for the issue of licenses for those with legitimate interests. They will subjected to a thorough security screening, including a criminal record check.

The new rules should introduce a clear definition of the “general public”, who will not be able to buy these chemicals, and “professional users” who need them for their work.

As terrorists come up with new ways to create explisives, employing ingredients not covered by current rules, the European Commission is proposing to add new chemicals to the list of restricted substances, such as sulphuric acid.

The new rules will apply to both online and offline sales.

Negotiatoris from the Parliament and the Council have already reached an agreement on what the final text of the legislation should be. Parliament’s civil liberties committee voted in favour of the deal on 19 February. It will now be up to all MEPs vote on it during the plenary session in April.

Briefing: revision of the legislation