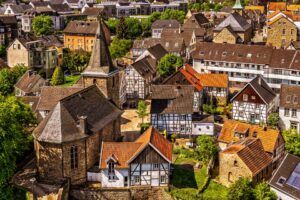 Urban decay, social conflict and low living standards are not uncommon in many of Europe’s historic city centres. Is it possible to breathe new life into these areas while doing it in a sustainable way?

Researchers working on the EU-funded ROCK project believe this can be done by harnessing a city’s cultural heritage. Art, monuments, archaeological sites, oral history and traditions “can be a unique and powerful engine of regeneration, sustainable development and economic growth for the whole city,” they state on their project website.

Since its launch in 2017, ROCK has employed a number of tools to promote culture-led urban regeneration through new sustainable processes that focus on the environment, society and economic growth. One recent initiative in Vilnius involves the creation of a programme to measure the happiness index of the city’s residents. Developed jointly with two other stakeholders, the programme met with success in its initial trials. Real-time calculation (every 3 seconds) of the average expression of happiness is now possible at six locations in Vilnius, yielding results on happiness at those locations over the course of a year, month, day and hour.

Hosted in Athens, this year’s project meeting focused on ways to reinvent historic city centres through culture and cultural heritage. The partners discussed their regeneration actions and projects, and exchanged know-how and good practices.

The first of a series of events intended to bring about creative interaction with the local community through dialogue and the open exchange of information was held in Skopje. The goal of the open day event was to promote informed decision-making and citizen participation in the spatial development of the city’s Old Bazaar area.

A recent webinar was held on living labs as a way of governing a city. The webinar provided the opportunity to discuss ideas and local experiences, with three concrete examples taken from Eindhoven’s experience in the living lab approach. The first two involved an abandoned factory area that has now been transformed into a creative and cultural district, and a long pub street that was the focus of interactive lighting design studies to improve safety perception. The third example concerned a former factory area flanked by the city centre and a residential district that has been the focus of a collaborative development process.