Disinformation to conceal war crimes: Russia is lying about atrocities in bucha

The images of bodies strewn across the streets of Bucha, killed execution-style, show the true face of Putin’s Russia. These images speak louder than words about the nature and aims of Russia’s war against Ukraine. Still, the pro-Kremlin media bolstered by Russian diplomatic social media accounts are speaking, in an attempt to distract and obfuscate the facts of war crimes. 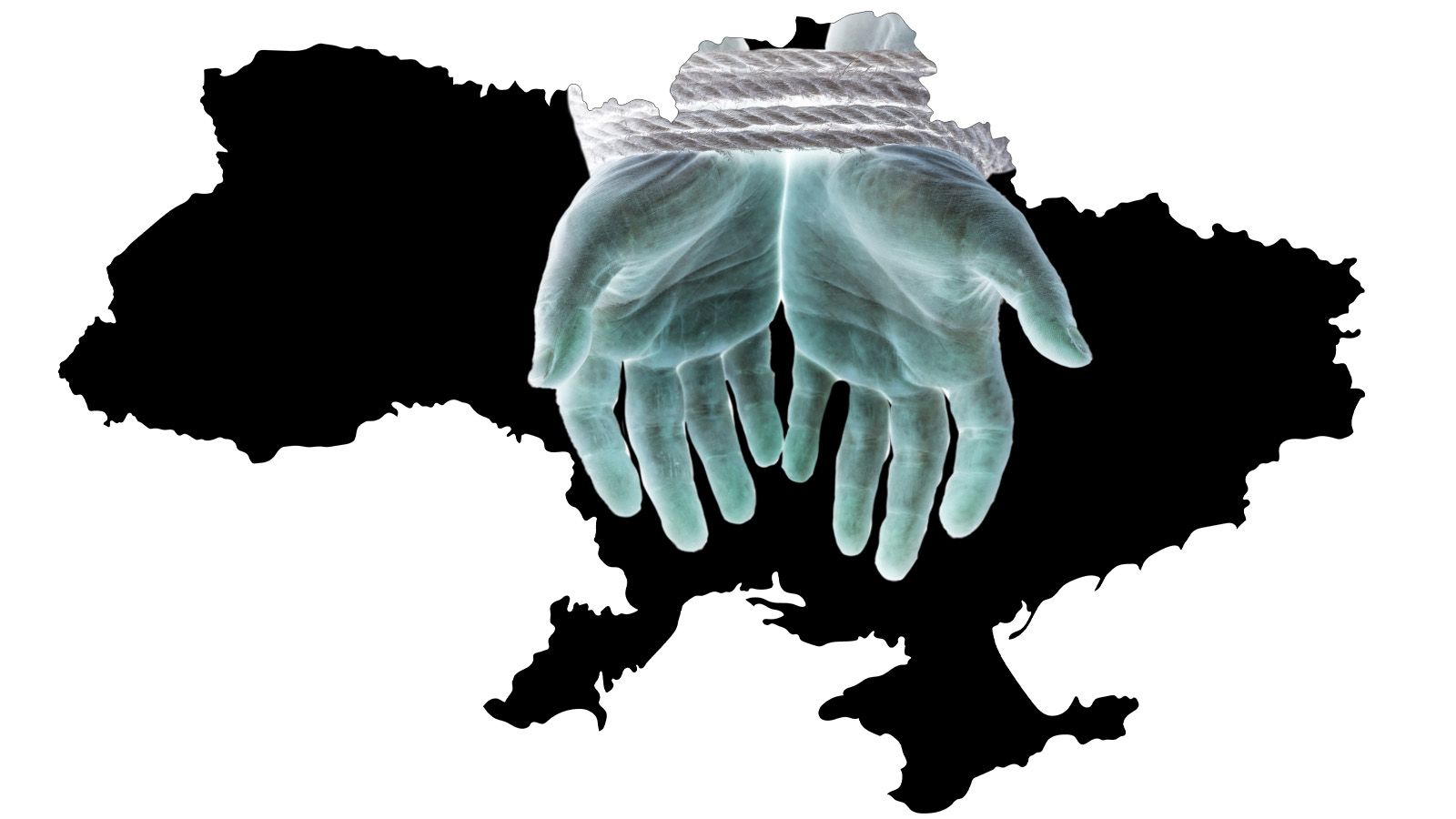 A Ukrainian provocation, a set-up to unleash World War III, a coordinated attack by the Western media, a distraction from “US biological laboratories” in Ukraine, a British plot – explained by the EU-sanctioned propagandist Vladimir Solovyov  with the resemblance of the name Bucha to the English word “butcher” – the excuses made by the pro-Kremlin media are as sickening as they are repetitive. (And they have been extensively debunked, see for example: BBC, Bellingcat, the Insider, MediaZona, NYT and others).

The Kremlin is trying to occupy the information space by flooding it with contradicting “explanations” of the events. The goal is not only to deflect the blame for this particular atrocity against peaceful civilians, but also to pre-emptively shape narratives for countering and discrediting any evidence or investigation into Russian war crimes in Ukraine. Russian state-controlled news agency RIA Novosti is working hard to fulfil this task already, alleging that Ukraine is preparing a “provocation” in Kherson, involving the deaths of civilians…

These tactics of flooding and preventively occupying the information space come straight out of the Kremlin’s disinformation playbook and were applied before, for example in the aftermath of Russia’s downing of flight MH17. The EUvsDisinfo database contains hundreds of examples of pro-Kremlin disinformation claims alleging, among other things, that like the killing of civilians in Bucha, the killing of civilians aboard MH17 was a provocation and a set-up to frame Russia, involving fake dead bodies (compare the claims in 2014 and now).

In contrast to 2014, the flooding of the international information space has become more complicated for the Kremlin, especially after the EU sanctioned RT and Sputnik. At the same time, Russian diplomatic accounts on social media have been playing a prominent role in the Kremlin’s communication strategy related to the invasion of Ukraine. In particular, Twitter accounts of Russia’s diplomatic missions acting in a coordinated network have been trying to discredit the reporting of independent media from Ukraine, and amplify disinformation narratives justifying the invasion.

Now, the network of Russian diplomatic Twitter accounts is amplifying lies about the Bucha killings, linking to a recently-created website that spreads disinformation behind the façade of fact-checking.

Russian diplomats on Twitter are also taking an active part in shaping the narrative of global “Russophobia”. Claims that the world is unfair and hostile to Russia and Russians have been at the core of pro-Kremlin disinformation narratives for years, and continue to be deliberately stoked in the context of war. On social media this has taken the shape of the “Stop hating Russians” campaign, distributed by Russian diplomatic accounts and portraying Russians as persecuted people because of their nationality (since the beginning of March a related hashtag was mentioned more than 24,000 times on Twitter). 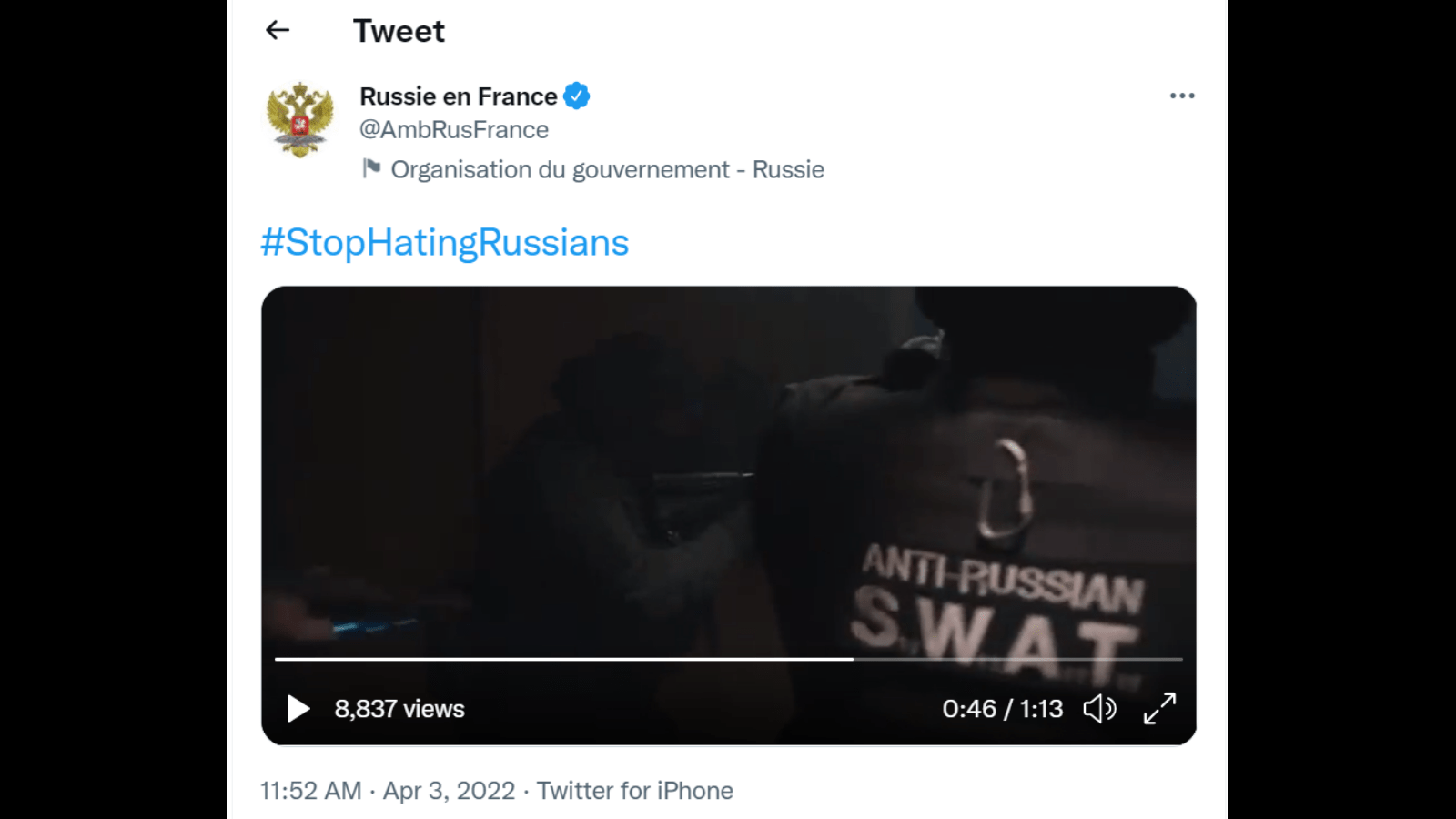 On 5 April, Twitter announced it “will not amplify or recommend government accounts belonging to states that limit access to free information and are engaged in armed interstate conflict”.

Support system for the war machine

As Russian diplomats are attempting to frame Russia as a victim of its own aggression against Ukraine – an effort that is likely to intensify amid calls supporting the investigation of Russian war crimes and crimes against humanity – pro-Kremlin pundits are charting a way forward.

To boost the notoriously poor morale of the invading Russian forces (and, perhaps, distract them from looting and marauding), Russian state news agency RIA Novosti published a long-form article headlined “What Russia should do with Ukraine”. Among other things, the text is calling for mass repression of the Ukrainian population and a ban of the name “Ukraine” itself. You can find a more detailed analysis here.

It is in this context that disinformation trying to obfuscate the Russian atrocities in Bucha should be seen – as a support system for Russia’s war machine and as a part of deliberate strategy to destroy Ukraine.