The European Documentation Centre of Almeria presents a new section of the digital fund that includes interviews conducted by the Director Ana Fe Gil Serra to institutional representatives, prominent people in the field of business, researchers, etc. 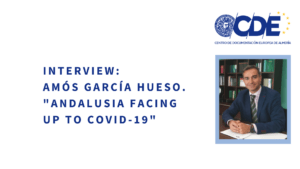 This section aims to be an attractive and direct communication space, offering added value in the field of Community policies that affect the European institutions and Spain.

The most significant interviews will be included in the bulletins that the CDE periodically publishes.

On this occasion Ana Fe Gil Serra, Director of the CDE of Almeria, had the privilege of interviewing Amós García Hueso, Director General of Andalusians Abroad in the Ministry of the Presidency of the Andalusian Government.

In the interview, Amós García Hueso describes how he lived the first weeks after the state of alarm was declared. He expresses his most sincere thanks to all the health personnel who, according to the Director-General, have been an example to follow.

He also spoke of the Andalusian Communities abroad, which are a network of entities of great value, built up with effort and will over many years and spread over the five continents.

With regard to the main lines of action of the Andalusian Government with respect to the pandemic, García Hueso, stresses that Andalusia has made anticipation the main shield against the pampering in Andalusia. He talks about the Andalucía Respira (Andalusia Breathes) Project, the fruit of audacity, innovation and Andalusian talent and also, about the solidarity of our community that has given respirators to other autonomous communities such as Madrid.

As for the exterior, Andalusia reinforces actions to reposition the Andalusia brand as a safe and quality destination with a promotional investment of three million euros. To this end, an ambitious tourism shock plan has been drawn up, which will mobilise 300 million euros. Among the objectives of the Plan are to reduce the impact of the crisis arising from this health alert, trying to avoid job losses in addition to strengthening the employment structure.

At the end of the interview Garcia Hueso makes a reflection that affects the conviction that a joint action is much more effective.