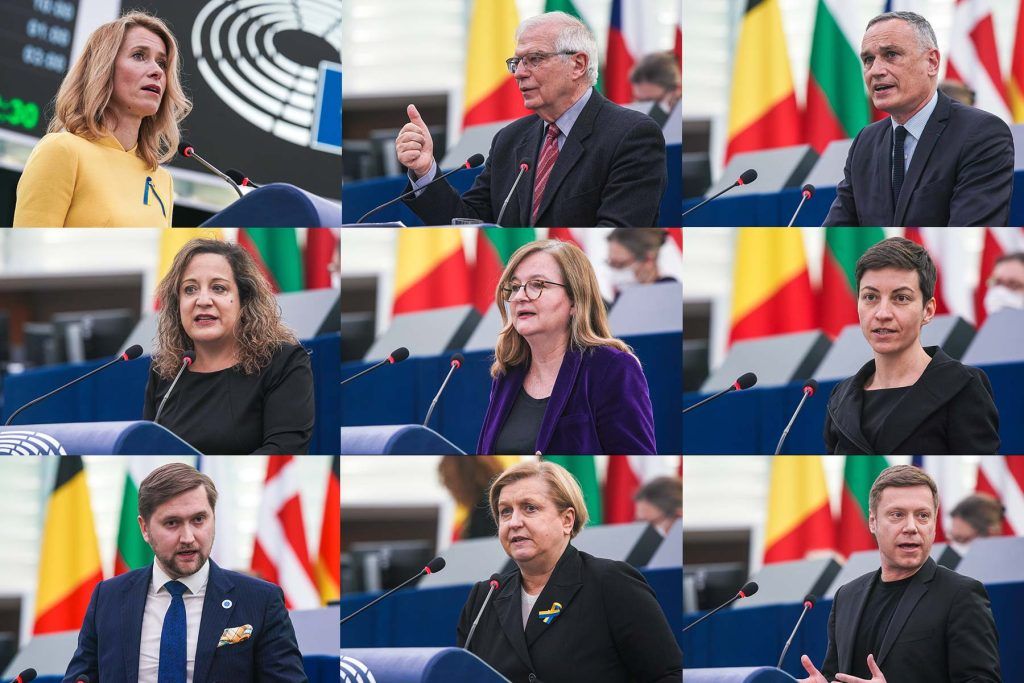 In the aftermath of Russia’s invasion of Ukraine, MEPs call for more EU defence efforts and further steps to cut Europe’s energy dependence on the Kremlin.

On Wednesday morning, MEPs debated Europe’s role in a changing world and the continent’s security situation in the wake of the Russian aggression against Ukraine with Estonian Prime Minister Kaja Kallas and EU Foreign Policy Chief Josep Borrell.

Kicking off the debate, Parliament’s President Roberta Metsola touched upon what the EU must do next to respond to Russia’s invasion and the Kremlin’s attempts to destabilise the European security order: “We need to re-assess Europe’s role in this new world. We need to boost our investment in defence and innovative technologies. This is the time for us to take decisive steps to ensure the security of all Europeans. The time to build a real Security and Defence Union and reduce our dependence on the Kremlin. What we have seen so far in terms of European coordination, solidarity and unity is unprecedented – and must be the blueprint for us going forward.”

Reminding MEPs that she, herself, is the child of a deportee whom Stalin sent away to Siberia, Estonian Prime Minister Kaja Kallas praised the actions the EU has taken to help Ukraine and the solidarity European citizens have shown to those fleeing war. She, nevertheless, pointed out: “We are in this for the long haul. We will have to exercise strategic patience, because peace is not going to break out tomorrow.”

Prime Minister Kallas called for a “Policy of Smart Containment”. She stressed the need for the EU “to push harder and faster to cut our energy dependence on Russian gas and oil” and to strengthen European defence working “hand-in-hand with NATO”. Speaking of the future of Ukraine, she said: “It is not only in our interest to give Ukraine a membership perspective; it is also our moral duty to do so. Ukraine is not fighting for Ukraine; it is fighting for Europe. If not now, then when?”

EU foreign policy chief Josep Borrell, in turn, emphasised how the ongoing war will “leave a mark in history” and underlined that the EU and its citizens must now finally make a collective effort to reduce their energy dependence on Russia. This also includes explaining to citizens “that our way of life comes with a cost”. Europe will have to be ready to pay the price in order to respond to Russia, and the consequences of this war will be long-lasting; shaping European policies for years and decades to come, he said.

You can watch the recording of their statements here.

In their speeches, many MEPs highlighted the EU’s previous failed efforts to boost its defence capabilities. They welcomed the new Strategic Compass to provide security in the EU and urged for a joint push to advance the European Defence Union, but called for efforts from all member states to transform their pledges into reality. They also stressed the need for the EU to cut its use of Russian gas and oil, for more investments in green technologies and energy storage and to introduce a proper migration system for welcoming and sharing responsibility for refugees.

Some Members pointed out that investing in security means more than just spending money on the military, for example it includes support for critical infrastructure, cyber resilience and speeding up the green transition. Others called for more effective sanctions against Russian President Vladimir Putin and his oligarchs, increased tax transparency and a need to slow down the arms race.