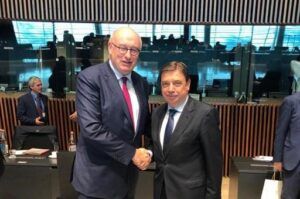 The European Commissioner for Agriculture and Rural Development, Phil Hogan, has announced the imminent presentation of a proposal for a regulation to open a measure to help private storage of olive oil, to help adjust the offer.

The acting Minister of Agriculture, Fisheries and Food, Luis Planas, has celebrated the announcement to present a proposal to authorize the private storage of olive oil in Spain made by the European Commissioner for Agriculture and Rural Development, Phil Hogan, during the Council of Agriculture Ministers of the European Union, in Luxembourg.

This proposal will consist of financing the storage of olive oil by oil mills and cooperatives, and thus facilitating price recovery. The measure is a recognition of the serious situation that the olive oil sector in Spain is going through, with prices below production costs, particularly in the traditional dry land olive grove.

The announcement takes place after last week’s meeting between Planas and Hogan, in Brussels. At the meeting, the seriousness of the situation of the olive oil sector in Spain and the added concern about the possible consequences before the US decision were analyzed. to impose additional tariffs on the export of Spanish agri-food products, in the case of Airbus, including olive oil.