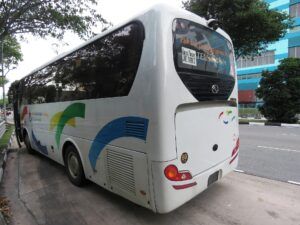 This services will enter service over the next two years and will help to improve air quality in these cities. Grupo Ruiz’s EIB-financed investments include the construction of three new electric charging stations in Badajoz, Alcudia and Palma de Mallorca.

The European Investment Bank (EIB) is set to finance the modernisation of Grupo Ruiz’s bus fleet by facilitating €27.5 million for the introduction of 173 safer, less polluting and more modern vehicles. EIB Vice-President Emma Navarro and Grupo Ruiz CEO Gregorio Ruiz signed the agreement in Madrid. This project is supported by the European Fund for Strategic Investments (EFSI), the main pillar of the Investment Plan for Europe.

Since 2016, the EU bank and the European Commission have been implementing a joint initiative dedicated to financing cleaner transport (the Cleaner Transport Facility). It has been helping many Spanish cities to swap their older, more polluting diesel vehicles for new hybrid, electric or latest generation compressed natural gas replacements. The agreement signed today is the fifth to be financed by the EIB in Spain under this initiative, for which it has provided almost €230m.

The project is being supported by the Investment Plan for Europe, whose guarantee makes it possible for the EIB to provide financing on favourable terms to support investments whose structure or nature means that they contribute to boosting economic growth and employment. In this case, the EIB-financed investments will facilitate the creation of 360 jobs during the project’s implementation phase.

The EIB and the Climate Action

The EIB is among the world’s largest multilateral providers of climate finance. The Bank’s goal is to be a leader in mobilising the finance needed to keep global warming under 2°C and to limit the temperature increase to 1.5°C in order to meet the Paris Agreement objectives. The Bank will gradually increase its financing for climate and environmental objectives up to 50% by 2025, with the goal of ensuring that the EIB Group mobilises at least EUR 1tn by 2030 to promote investments helping to meet these objectives. To this end, the EIB will cease financing fossil fuel-based projects from late 2021.

In 2016, the European Commission and the EIB presented the new initiative for financing cleaner transport systems and cutting emissions (Cleaner Transport Facility – CTF). This mechanism supports the rollout of alternative fuel-powered vehicles, particularly fleets operated by private organisations, as well as vehicle charging infrastructure in the European strategic transport network.

The Investment Plan for Europe, known as the “Juncker Plan”, is one of the European Commission’s top priorities. It focuses on boosting investment to generate jobs and growth by making smarter use of financial resources, removing obstacles to investment, and providing visibility and technical assistance to investment projects.

The European Fund for Strategic Investments (EFSI) is the main pillar of the Juncker Plan and provides first loss guarantees enabling the EIB to invest in more, often riskier projects. The projects and agreements approved for financing under EFSI are expected to mobilise more than EUR 458.8bn in investment – including €49.8bn in Spain – supporting over 1 million start-ups and SMEs across the 28 EU Member States. Juncker Plan-supported investments have increased the EU’s GDP by 0.9% and created an additional 1.1 million jobs compared to the reference scenario. By 2022, the Juncker Plan will have increased EU GDP by 1.8% and have created 1.7 million additional jobs.