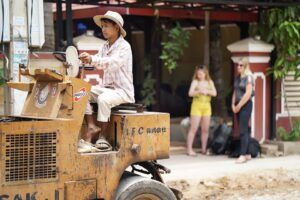 On the occasion of the World Day against Child Labour on 12 June, the European Union, alongside its international partners, reiterates its strong commitment towards guaranteeing the fundamental human rights of every child, as defined in the 2030 Agenda for Sustainable Development target to end child labour in all its forms by 2025.

This year, the EU marks the 30th anniversary of the UN Convention on the Rights of the Child and the 20th anniversary of the International Labour Organisation Convention on the Worst Forms of Child Labour – representing the cornerstone of international protection of children’s rights – the need to see more results towards eliminating child labour is even more blatant.

Prioritising the fight against child labour in all relevant sectors and policies, in particular education, responsible business, vocational training, agriculture, manufacturing, mining, facilitating school to work transition, is key to reach the 2025 UN target. We are taking action using all the tools at our disposal, ranging from development cooperation, political and human rights dialogues, to social and trade policies.

The EU engage together with UN partners, civil society organisations as well as the private business sector to raise awareness about this issue and to develop regional strategies tackling trans-border child labour. The overarching aim is to fight against all its forms throughout the supply chains through initiatives like the “Clear Cotton on the Elimination of Child Labour and Forced Labour in the Cotton, Textile and Garment Value Chains”. Through this project worth €7.5 million, the EU supports law enforcement and work with companies and communities to address the basic needs and rights of children engaged in, or at risk of child labour in Burkina Faso, Mali, Pakistan and Peru.

The EU also contributes to the protection of children in conflicts, including in Syria and Yemen. It continuously increase the funding of Education in Emergencies, having reached 10% of the EU’s humanitarian aid budget in 2019, and supports its partners creating social protection floors and quality education legislations to help abolish child labour, and use trade incentives, such as General Scheme of Preferences, to encourage other countries in this direction.

The EU will continue to be a champion in the fight for children’s rights worldwide in order to build a better present and a better future for the young generations.