The Commission has published its annual report on how the EU institutions and Member States have been applying the EU Charter of Fundamental Rights. This year marks the 10th anniversary of the Charter. On this occasion, the Commission is also releasing a Eurobarometer survey on citizens’ awareness of the Charter. Thanks to the Charter, a culture of fundamental rights has developed in the work of the EU institutions over the last ten years. But the Charter is not yet used to its full potential by the enforcement chain and awareness remains low.

The report shows that European policy makers are increasingly aware of the importance of ensuring that initiatives are Charter compliant and the EU has adopted many initiatives protecting people’s fundamental rights, such as the General Data Protection Regulation.

The Charter is nevertheless still not used to its full potential and awareness remains low, especially at the national level. The EU Agency of Fundamental Rights points to a lack of national policies that promote awareness and implementation of the Charter. Today’s Eurobarometer survey shows that though the situation has slightly improved since 2012, only four in 10 citizens have heard of the Charter and only one in 10 know what it is. Six out of 10 would like more information on Charter rights and on where to turn to if their rights are violated.

As regards the application of the Charter in 2018, the report mentions key initiatives by the EU such as:

o   promoting electoral rights (Measures to promote free and fair elections, Communication on disinformation and invitation to online platforms and the advertising industry to take action to tackle fake news) and

o   fighting illegal hate speech online (Monitoring of the impact of the Code of Conduct on countering online hate speech).

Finally the report shows that there is room for improvement, especially at national level. Non-respect of the rule of law and of asylum legislation was and remains a problem in part of the EU.

On 12 November this year, the European Commission, the Finnish Presidency of the EU and the EU Agency for Fundamental Rights will hold a 10-year anniversary conference to celebrate the Charter. Participants will reflect on how to improve the use of the Charter on the ground in the Member States.

With the entry into force of the Lisbon Treaty on 1 December 2009, theCharter of Fundamental Rights became legally binding. Since then, the European Commission has published an annual report on the application of the Charter.

The annual reports monitor progress in the areas where the EU has powers to act, showing how the Charter has been taken into account in actual cases, notably when new EU legislation is proposed. It addresses the role that EU institutions and Member States authorities play in making fundamental rights a reality in peoples’ lives.

The Commission works with the relevant authorities at national, local and EU level to better inform people about their fundamental rights and where to find help if their rights have been infringed. Practical information is available on the e-Justice portal.

EU Charter of Fundamental rights at the EU Court of Justice 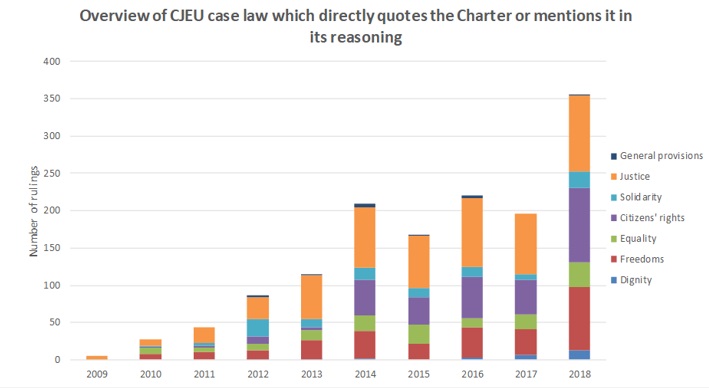 When referring questions to the Court of Justice of the EU (requests for preliminary rulings), national courts increasingly make reference to the Charter (84 in 2018, compared to 19 in 2010). 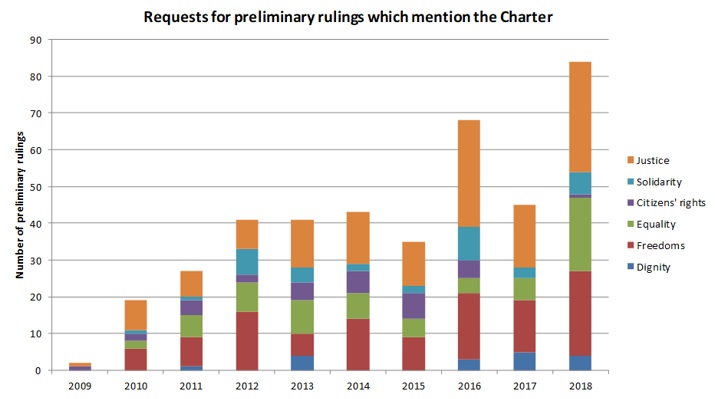 Eurobarometer results: Awareness of the Charter of Fundamental rights

The Eurobarometer on Charter awareness shows that though the situation has slightly improved since 2012, only 42% of respondents have heard of the Charter and only 12% really know what it is. 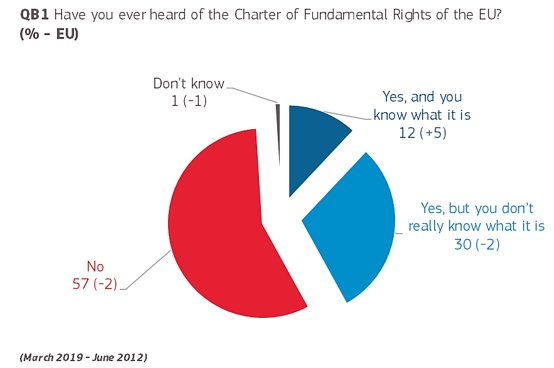 Results also show that six in ten respondents would like to have more information on the Charter and on where to turn to if their Charter rights are violated. 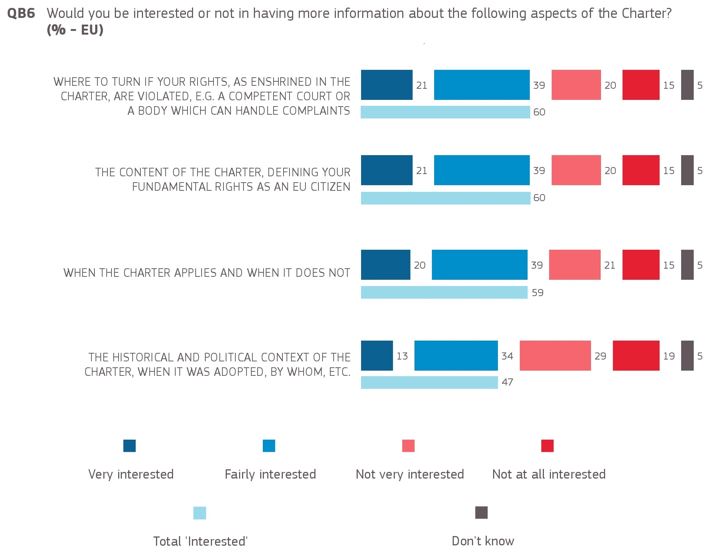 Eurobarometer and factsheets on Awareness of Fundamental Rights