More than 350 participants from Member States, EU institutions, industry, academia and think tanks joined the high-level online symposium on ‘Military Mobility – Transforming Ambition into Reality’, co-organised by the Portuguese Presidency of the Council of the European Union and EDA. After 2018, it was the second European conference specifically devoted to Military Mobility. 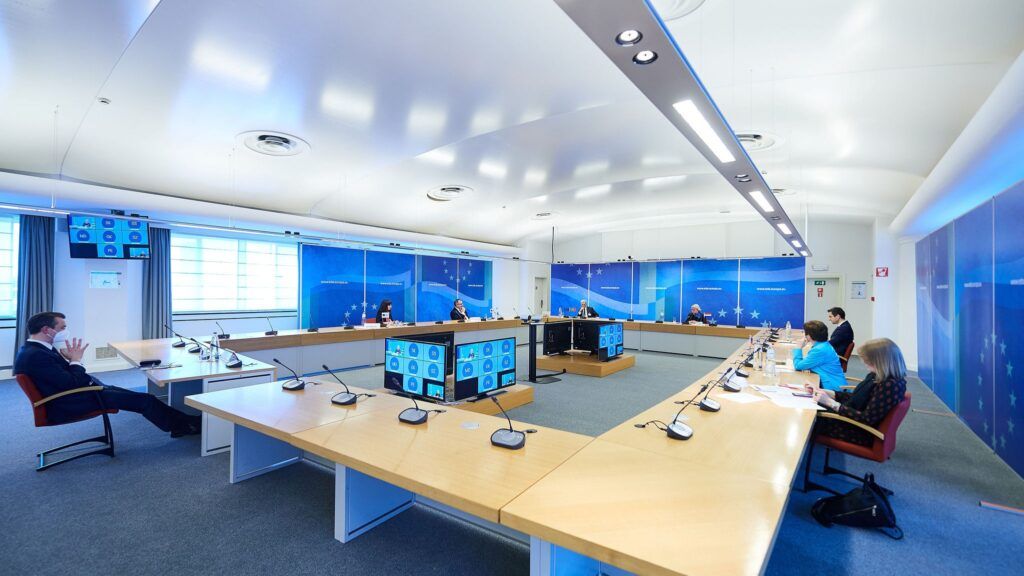 In his opening remarks, EDA Chief Executive Jiří Šedivý recalled the impressive progress made on this important topic over the past three years, especially as regard the implementation of the EU Action Plan on Military Mobility (launched in March 2018) whose main action points – stretching from transport infrastructure and regulatory issues to cross-border movement permissions and diplomatic clearances – are either already completed or at the verge of completion. EDA is also contributing to this common effort with two major programmes successfully underway: one aimed at harmonising military requirement related to customs and one that aims to optimise cross-border movement permission procedures in Europe.

“Still, there is more to be done in transforming this ambition into reality. The challenges that lay ahead of us are the full implementation of these achievements in our day-to-day practice and addressing the way forward to the next stage of an Enhanced Military Mobility”, Mr Šedivý said.  Referring to the new impetus that last year’s first Coordinated Annual Review on Defence (CARD) has given to the topic, by making Enhanced Military Mobility one of the six ‘focus areas’ identified for future European cooperation, the EDA Chief Executive called for “sustaining this political momentum” and using the potential this focus area has “to form clusters of projects and activities in capability development and research and technologies”. Military Mobility has also been taken up under a Dutch-led PESCO (Permanent Structured Cooperation) project, as well as (more indirectly) under a German-led ‘Network of Logistic Hubs in Europe and Support to Operations’ (Loghubs) project. EDA has supporting roles in both PESCO projects and “will continue its efforts and contribute its part to this important joint endeavour”, Mr Šedivý said. He also praised Military Mobility is a “flagship project of EU-NATO cooperation” and a “prime example of effective interactions between the EU and NATO”.

In his speech, Mircea Geoana, NATO’s Deputy Secretary General, stressed the need for cooperation and symbiosis between NATO and the EU, and said the cooperation on Military Mobility, a crucial aspect of European and transatlantic defence, was testimony to that. NATO welcomes the EU’s decision, announced the same day at the EU Foreign Affairs/Defence Council, to allow the participation of the US, Canada and Norway in the Dutch-led PESCO Military Mobility project because “non-EU allies make an essential contribution to the defence and security of Europe”, he said. Military Mobility is essential to move troops across the Atlantic and across Europe, making it a crucial element of deterrence, he added. Therefore, NATO appreciates the fact that Military Mobility has become a flagship project of EU/NATO cooperation, based on Joint Declarations of 2016 and 2018. ”Our respective efforts must be mutually reinforcing and benefit all EU and NATO members alike”, Mr Geoana said.

João Gomes Cravinho (Portugal) emphasised the wider strategic importance of Military Mobility, not also for the EU but also for NATO and the wider transatlantic relationship. If we are successful in this project, it will make a major contribution to Europe’s transatlantic relations and to the EU/NATO relationship, he said. The strategic relevance of Military Mobility is not to be underestimated, its importance and implications go beyond just military considerations. “We see a lot of technical work going on (between EU and NATO), but the result of this technical work will be a political result because, at the end of the day, it is a political project. I hope that Military Mobility will open the door to deeper cooperation between the EU and NATO in a wider range of areas. I hope that in 2035, we can look back and say: the Military Mobility project was the pioneer project” for this enhanced EU/NATO cooperation, the Portuguese Minister said.

Ank Bijleveld (Netherlands) said it was a “big day” for Military Mobility given that the Council had given its green light to the participation of the US, Canada and Norway in the related (Dutch-led) PESCO project. Those three countries “will provide much added value to the project with their expertise and know-how” and it will also “give a boost to increase EU/NATO cooperation”, the Minister stated. “Cooperation between the EU and NATO in this matter is crucial. We look forward to working with all relevant actors: the European External Action Service, the European Commission, the EU Military Staff, the European Defence Agency, NATO and others to further bring forward Military Mobility” which, at the end of the day, will have to be “simple, secure and digital”, she stressed.

Annegret Kramp-Karrenbauer (Germany) also welcomed the participation of the US, Canada, and Norway in the PESCO project, saying it “adds great value to our efforts” in the Military Mobility domain which, she felt, had been “ignored” for too long.  A lot of work remains to be done as Military Mobility is “one of the most complex issues we are dealing with”. The German Minister also praised Military Mobility as a “prime example of better EU-NATO alignment” and enhanced cooperation. “Later this year, NATO’s new Multinational Joint Support and Enabling Command (JSEC), based in Ulm/Germany, will be fully operational. This reflects the key role Germany plays as the centrally-located mobility hub for Alliance logistic”. The Minister also announced Germany’s intention to pursue a “new project” with the Netherlands: the two Ministries of Defence are currently preparing the establishment of a “Dutch-German office for coordination and alignment of Military Mobility”. “We hope other countries will join this innovation incubator once it is established”, Mrs Kramp-Karrenbauer said.

Slovenian Defence Minister Matej Tonin, whose country will take over the rotating EU Presidency in the second half of this year, said that one of his priorities would be to bring forward EU-NATO cooperation. “As Military mobility represents a project which is key for EU and NATO, it is important that the dialogue between the EU and NATO in field of military mobility, as in many other areas, continues”, he stated. Furthermore, during the upcoming EU Presidency, Slovenia intends to bring forward the collective work on the CARD’s ‘Enhanced Military Mobility’ focus area. “I believe that combining different projects and initiatives into single focus area will improve coordination and facilitate implementation of new capabilities and procedures in the field. Rest assured that Slovenia is supporting it and looking forward to participating in this focus area”, the Minister stressed. Mr Tonin also welcomed today’s Council decision on the participation of Canada, the US and Norway in the PESCO project: “We strongly believe that non-EU Member States and other partner countries should also have the opportunity to participate as their forces and capabilities can potentially be an integral part of our joint defence efforts when necessary”.

Pawel Herczynski, Managing Director at the European External Action Service (EEAS), said Military Mobility would also be part of the wider (ongoing) work on the EU’s Strategic Compass.  “We are currently in the brain-storming phase among EU Member States on what goals and objectives Member States want to set in the field of security and defence, including on Military Mobility”, he said. “We look forward to concrete and actionable ideas which can guide our work in the years to come” with a view to operationalising the Military Mobility measures taken so far.  One thing is sure, Mr Herczynski stressed: “the relevance of Military Mobility will only grow”.