The European Commission has published the country reports of each Member State. These reports come from the European Semester that provides a framework for the coordination of economic policies throughout the European Union. The country reports, published in the so-called Winter Package on February 26, address some of the most important economic and social policy challenges for Member States, including their health systems. Health reforms are ongoing in most Member States, with different levels of focus and pace.

The Commission has published:

Findings of the country reports

The analysis provided in this year’s country reports sets out the path for Member States to deliver on competitive sustainability and points towards the required structural reforms and investments challenges.

The country reports highlight that productivity growth remains a challenge, even more so in the light of demographic change. Poverty and social exclusion continue to decline on the back of good labour market conditions, but important pockets of vulnerability remain.

Member States continue to have very different positions in terms of debt and sustainability challenges. Government deficits in the EU have, on average, started rising again, reversing the declining trend of recent years. Public debt ratios remain on a declining path in many Member States, but not in those where debt reduction is most needed. Member States are still struggling to get back to their pre-crisis public investment levels. In particular, public investment spending remains at historically low levels and the ratio of public investment to GDP is projected to increase only marginally, especially in the euro area.

Implementation of the country-specific recommendations continued, albeit to a differing extent across Member States. Reinvigorated reform implementation is needed amid high uncertainty surrounding the economic outlook.

The 2020 Annual Sustainable Growth Strategy was the first step in refocusing the European Semester on competitive sustainability, with the aim to build an economy that works for people and the planet in line with the European Green Deal.

The Commission has also started to integrate the United Nations Sustainable Development Goals (SDGs) into the European Semester as part of its strategy to put sustainable development at the heart of economic policy.

The country reports published today reflect this new approach. SDG-relevant policies and challenges are identified across the country reports, and a new annex sets out Member States’ performance in respect of the SDGs and the trend over the past five years.

The reports also feature a new dedicated section on environmental sustainability. This provides a more comprehensive analysis of Member States’ environmental challenges, with a focus on those areas that interlink with economic and employment policies.

The Commission has presented a country report for the United Kingdom

On 31 January 2020, the United Kingdom withdrew from the European Union and the European Atomic Energy Community (Euratom). The arrangements for the withdrawal are set out in the Withdrawal Agreement, which entered into force on 1 February 2020. It provides for a transition period, lasting until at least 31 December 2020, during which EU law continues to apply to, and in, the United Kingdom.

This means that, until the end of the transition period, the UK will be part of the European Semester.

Involvement of Member States in the preparation of the country reports

National authorities are consulted on the analytical content of the country reports in advance of their publication and are given the opportunity to check the accuracy of facts and figures contained within the reports. This consultation helps the Commission to be precise in the analysis and facilitates a common understanding of the most pressing issues.

This year, for the first time, the Commission has reached out to national authorities to select a topic of common interest for deeper analysis in the country reports. Most national authorities directed their interest towards topics of relevance to the green and digital transitions and their impacts on the economy, industry and workforce, a strong sign of alignment of interest and priorities with the new economic agenda of the Commission.

Next steps for the country reports

In the coming months, the Commission will engage with Member States to seek the views of national parliaments, governments, social partners and other stakeholders on the analysis and conclusions of the country reports.

On the basis of these programmes and the country reports, the Commission will present its proposals for a new set of country-specific recommendations in spring 2020, targeting the key challenges that Member States should address in 2020-2021. 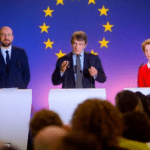