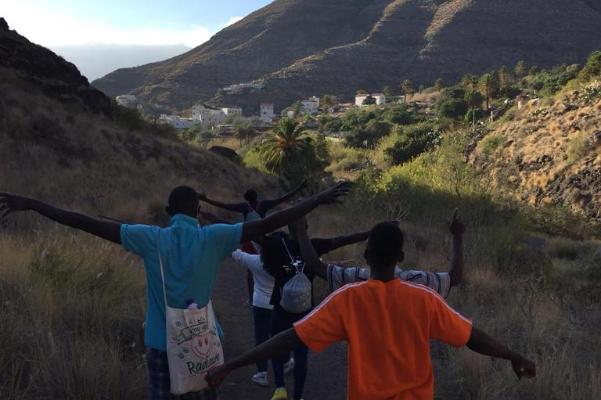 The Polideportivo de Villa de Moya will host next Friday 29 October the award ceremony of the European Citizen Prize 2021 of the European Parliament, awarded to the citizens of this town, who, despite having limited economic resources, offered facilities in the Canary Islands to migrants who arrived during the crisis at the end of 2019, in addition to ceding the town’s shelter to house 50 adult migrants and unaccompanied minors in March 2020.

The ceremony will be attended by the MEP promoting the candidacy, Gabriel Mato (EPP) and the director of Talent Europe and member of the jury, Álvaro Rojas, as well as the Mayor of Moya, Raúl Alfonso, Carlos Rul-lan, Public Relations of the European Parliament Office in Spain, Maguette Diop, who will speak as a representative of the migrants in the aid programme, and the representative of the Volunteers of the Villa de Moya, David Melián.

The event will close with a performance by the Philharmonic Orchestra of Gran Canaria. After this ceremony, the following day, Saturday 30th October, at 10:30 am, a visit to the reception centre for migrants in Villa de Moya will take place, specifically to the “Corvo 2” centre (Camino del Drago, 2, Moya).

The members of the jury have recognised, through this award, the hospitality of the group of volunteers, and emphasise that “their activities give concrete expression to the values enshrined in the Charter of Fundamental Rights of the European Union, and promote closer integration between citizens, while facilitating cross-border and transnational cooperation within the European Union”.

The Volunteers of the Villa de Moya

In addition to welcoming migrants, the group of volunteers from the small Canary Island town has organised solidarity actions and economic aid to the African continent, as well as meetings between rural women from the Canary Islands and Africa and cooperation projects between migrants and neighbours. It has also set up workshops to disseminate the traditions of each culture, and has carried out other actions such as the schooling of a dozen immigrant children, enrolment in artistic schools for those who are interested in an artistic discipline, or offering to join local sports clubs.

This group of volunteers will also participate on 9 November 2021 in a central ceremony with the other winners of the 2020 edition, including the Spanish platform “Somos Tribu VK”, as the previous edition was postponed due to the incidence of the coronavirus pandemic.

What is the Citizen’s Prize?

The European Citizens’ Prize has been awarded annually since 2008 to “exceptional individuals or organisations who fight for European values, promote integration between citizens and Member States or facilitate transnational cooperation within the Union, and to those who strive on a daily basis to promote the values of the EU Charter of Fundamental Rights”.

The 2021 edition has awarded a total of 28 projects from all 27 Member States. As was the case in the 2020 edition, this year it was also possible to submit nominations on the initiative of citizens and associations, unlike in previous editions, which had to be registered exclusively by MEPs. In the case of Spain, the winning entry was registered by Gabriel Mato MEP (EPP).