The last decade has certainly not lacked for foreign policy challenges for the EU. On a global scale, these have included a more assertive Russia, a rising China that is becoming evermore confident in pursuing its interests, a United States that has begun a series of trade conflicts that many argue threaten the world’s economic prosperity. 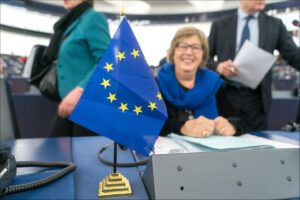 Closer to its doorstep, the EU has also had to grapple with the Arab Spring that resulted in bloody civil wars in Syria and Libya that are still ongoing, as well as a major migration crisis. Meanwhile, an armed conflict continues to simmer in eastern Ukraine and finally, the Balkans and ‘Eastern Partnership’ regions still present important challenges as many countries here aim for closer integration with – and even one day accession to – the EU.

Whilst one of the world’s three unrivalled economic and trade powers (alongside the US and China), the EU arguably does not punch its weight in the complex game of international diplomacy. This is mainly because foreign policy remains a core competence of the EU Member States but alas, the EU is not completely toothless in this domain. Since 1999, Member States have committed themselves to a Common Foreign and Security Policy (CFSP), with the aim of strengthening the EU’s external ability to act through the development of civilian and military capabilities in conflict prevention and crisis management.

Then the Lisbon Treaty created the role of High Representative of the Union for Foreign Affairs and Security Policy, as well as the European External Action Service (EEAS) that acts as the EU’s foreign and diplomatic service. In 2016, the EEAS launched its Global Strategy which sets out the EU’s core interests and principles for engaging in the wider world, as well as giving the EU a collective sense of direction.

But are these capabilities and strategies enough or does the EU need to be granted further foreign policy powers? Here, you inevitably begin the argument over further European integration. Integrationists would argue that European nation-states, even the largest ones, are no longer quite large enough and that only a more powerful EU will guarantee Europe’s place at the top table. On the other side of the debate, others passionately argue that effective foreign policy must remain the prerequisite of independent sovereign states.

In light of these two viewpoints, EU-funded researchers under the Horizon 2020 programme have much to say on this topic.The european projects EU-CIVCAP and EUNPACK projects explore the EU’s conflict prevention and crisis response capabilities whilst our other featured projects showcase the EU’s ongoing relationships and policy challenges with specific countries/regions: Russia, Turkey, the Middle East, the Caribbean and Latin America, and finally the Eastern Partnership countries.