This document collects and analyzes data on the evolution of COVID-19, collected by Johns Hopkins University and published daily by the European Documentation Center of Almería during the months of May, June and July 2020.

Evolution of confirmed cases in America

Evolution of deaths cases in America

The number of passing was 152.425 during May which represents 6.74% out of the total confirmed cases until this day. Within the next month, this figure increased reaching 248.391 (62,95% more than in the previous month). The numbers in July show 351.003 deaths within this month which represents an increase of 41.31%.

Evolution of recovers in America

Most affected American Countries by COVID-19

Most passings in America by COVID-19

The countries with a lower number of deaths are Saint Lucia (0), Antigua and Barbuda (3) and Trinidad and Tobago (8).

Quarterly evolution of COVID-19 in the most affected countries

USA recorded 1.669.933 confirmed cases at the end of May, being the most affected country in America. Thus, the position in the ranking would not vary within the next month as the country recorded 2.590.582 and 4.427.493 confirmed cases in July. The evolution of the data since may until July shows an increase of 165.13%.

USA recorded 100.422 passings by COVID-19 within May and followed by 126.141 cases in June. This number increased thorugh the next month reaching 150.716 passings which represents a 3.40% of the confirmed cases in the country.

During this quarter, the country of Chile registered a total of 82,289 cases in May, with an increase in the month of June to reach 275,999 infected throughout the country. July data shows 351,575 cases (1.88% of the country’s total population).

The total number of cases in Peru during the month of May, as we can see in the graph, reached 135,905, suffering a considerable increase during the month of June until reaching 282,365 infected. In July, 400,683 people were infected (1.09% of the country’s total population). 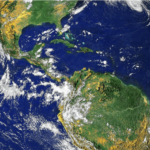