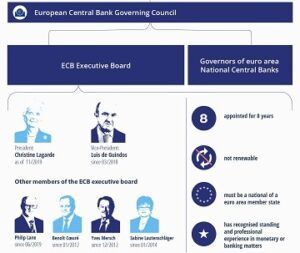 The European Council appointed Christine Lagarde to be the President of the European Central Bank for a non-renewable term of 8 years.

Christine Lagarde will replace the outgoing President, Mario Draghi, as of 1 November 2019.

The ECB executive board is responsible for the implementation of euro area monetary policy, as laid down by the ECB governing council. It is composed of the President, the Vice President and four other members, all appointed for a non-renewable 8-year term. The governing council is composed of six executive board members and the governors of national central banks of the euro area member states.

Infographic – Appointment of the ECB Executive Board