Avoidable deaths for people under 75 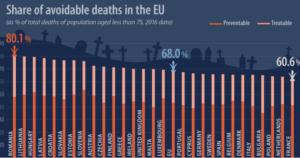 In the European Union (EU), about 1.7 million persons aged less than 75 died in 2016. Among them, around 1.2 million deaths could be considered as premature according to the recently developed Eurostat-OECD list of avoidable mortality. Out of those, 741 000 preventable deaths could have been avoided through effective public health and primary prevention interventions, and 422 000 treatable deaths through timely and effective health care interventions.

Heart attacks (174 000 deaths), cancers of the trachea, bronchus and lung (168 000 deaths) and strokes (87 000) accounted together for over a third (37%) of total avoidable causes of death of people aged less than 75. Compared to 2011, avoidable deaths as a share of total deaths decreased by 1.7 percentage points, from 69.7% of total deaths in 2011 to 68.0% in 2016. This information on avoidable deaths comes from a report issued by Eurostat, the statistical office of the European Union. The concept of avoidable mortality is based on the idea that certain deaths (for specific age groups and from specific diseases) could be ‘avoided’ – meaning they would not have occurred at this stage – if there had been effective public health and primary prevention interventions and/or timely and effective health care in place.

Both the treatable mortality and the preventable mortality indicators are meant to be used in a global context of peer reviewed health system performance assessments. They provide a warning signal of potential shortcomings in health systems but are not intended to be a definitive measure for monitoring health care across Member States.

Largest shares of preventable deaths in Slovenia and Hungary, lowest in Bulgaria