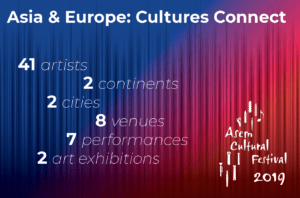 ASEM Cultural Festival 2019 under the theme “Asia & Europe: Cultures Connect” will celebrate the diversity of traditional and contemporary cultural creativity in Asia and Europe, emphasising artistic and creative synergies between musicians, dancers and artists who today have increasing opportunities for creative encounters and dialogue.

The ASEM Cultural Festival is an official side event of the 14th ASEM Foreign Ministers’ Meeting (ASEMFMM14) which will take place in Madrid on 15 and 16 December 2019. The prestigious cultural centre, Centre for Fine Arts-Brussels (BOZAR), will organise the curtain raiser in Brussels on 6 December 2019 in the lead up to this Festival.

What is ASEM Cultural Fest

The ASEM Cultural Festival (#ASEMfest) is an official side event of the 14th ASEM Foreign Ministers’ Meeting (ASEMFMM14) which will take place in Madrid on 15 and 16 December 2019. The Asia-Europe Meeting (ASEM) is an intergovernmental process established in 1996 to promote dialogue and cooperation between Asia and Europe. There are currently 53 Partners, of which 30 are European countries and 21 are Asian countries, along with the European Union and the ASEAN Secretariat.

Since its inception, the ASEM political process attached great importance to the promotion of relations between civil societies in Asia and Europe through exchanges in multiple fields with the aim of promoting strong and lasting links between the two regions, with the Asia-Europe Foundation’s (ASEF) work in culture being one of the main tools for achieving the proposed objective. The ASEM Cultural Festival, an initiative of ASEM Partners is held in the host cities of key ASEM Ministerial Meetings.