10 years of the Eastern Partnership: celebrations take place in Brussels 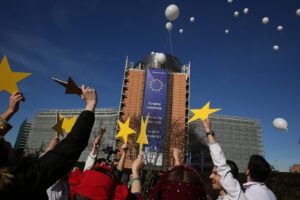 High Representative /Vice-President, Federica Mogherini, will chair the annual Eastern Partnership Foreign Affairs Ministerial Meeting on 13 May with the 28 EU Member States, the EU’s six Eastern partners and the Commissioner for European Neighbourhood Policy and Enlargement Negotiations, Johannes Hahn. The meeting will take stock of the progress made under the ambitious 20 Deliverables for 2020 work plan adopted at the last Eastern Partnership Summit of November 2017.

President Juncker, High Representative/Vice-President Mogherini and Commissioner Hahn will attend on Monday evening a celebratory dinner hosted by the President of the European Council, Donald Tusk, for the six Heads of State or Government of the Eastern partner countries – Armenia, Azerbaijan, Belarus, Georgia, the Republic of Moldova and Ukraine. On Tuesday 14 May, President Juncker will host a High-level Conference in the European Commission’s Charlemagne building. High Representative/Vice-President Federica Mogherini, Commissioner Hahn and the Commissioner for Trade, Cecilia Malmström, will also participate. The event will be an opportunity to discuss the developments of the partnership during this first decade and exchange on its future among a wide audience of key stakeholders active in the region or directly involved in this policy framework.

Coverage will be provided by EbS. The full press release and dedicated factsheets are available here. Further information is available on the website of the 10thAnniversary of the Eastern Partnership.