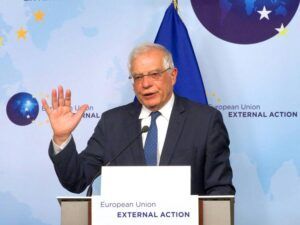 The President of the European Council, Charles Michel, together with High Representative Josep Borrell, have met recently with Fayez al-Sarraj, Chairman of the Presidency Council of the Government of National Accord of the State of Libya, upon his arrival in Brussels.

President Michel expressed concerns about the worrying military escalations in Libya. He underlined that there is no military solution to the Libyan crisis, only a political process can bring peace and stability closer. Libyans should be at the heart of defining their own future. The European Union will step up efforts towards a peaceful and political solution. The European Union fully supports the Berlin process and all UN initiatives aimed at finding a comprehensive political solution to the crisis in Libya. High Representative Borrell reiterated the importance of creating the right conditions ahead of future steps as discussed during the ministerial that took place yesterday.

President Michel raised the recent Turkey-Libya Memorandum of Understanding (MOU) on the delimitation of maritime jurisdictions in the Mediterranean Sea and expressed the European Union’s position that the MOU infringes upon the sovereign rights of third States and does not comply with the Law of the Sea and cannot produce any legal consequences for third States.

President of the European Council Charles Michel also clearly condemned the recent attacks in Libya, in particular the strike against the military school in Tripoli and the attack on the Sirte airport. He also reiterated that the European Union has always and consistently supported the Government of National Accord as the legitimate government of Libya and that the EU stands ready to provide all possible support to the political process.

Libya: Remarks by High Representative/Vice-President Josep Borrell following his meeting on Libya with the Ministers of Foreign Affairs of France, Germany, Italy and the United Kingdom