Federica Mogherini represented the European Union at the annual ASEAN Regional Forum and EU-ASEAN ministerial looking back on five years of increased cooperation between Europe and Asia and setting in motion the future direction. 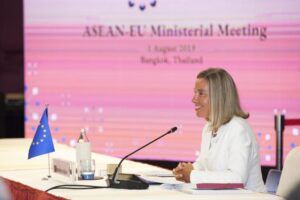 Federica Mogherini, in her opening remarks, spoke about moving forward with the EU-ASEAN Strategic Partnership, enhanced connectivity between Europe and Asia, the need to support the rules-based international order, and effective multilateralism.

Regional and global security issues were also high on the agenda at the ASEAN Regional Forum. On the topic of the Korean Peninsula, which she also discussed bilaterally in a meeting with the Foreign Minister of the Republic of Korea, Federica Mogherini stressed the need for continued diplomatic efforts to achieve the goal of complete, verifiable and irreversible denuclearisation. She stressed the need for all stakeholders and powers to contribute positively.

The Rohingya crisis was also a topic of discussion, both in the Forum and in bilateral meetings notably with the Myanmar Minister for International Cooperation and the Foreign Minister of Indonesia. Federica Mogherini stressed the importance of the government of Myanmar continuing to work fully with UN mechanisms and to ensure access for all humanitarian agencies. All allegations of serious crimes must be addressed, as must the root causes of the conflict.

On the South China Sea, the High Representative called for transparency and the rapid conclusion of negotiations for a legally binding Code of Conduct between China and ASEAN as well as the respect for international law, including UNCLOS.

While in Bangkok, Mogherini had a number of additional meetings with Ministers from Thailand, New Zealand, Cambodia, China, India, Japan, Canada, and Sri Lanka, with each providing an opportunity to reflect on the state of relations with the European Union and to discuss the next steps.

Such interests include free and fair trade, where we are building a new generation of agreements, and increasing connections between the EU and ASEAN. Asia and Europe are closer than ever thanks to the Erasmus programme –now open to Asian students and researchers-, and will soon form the world’s biggest aviation market when the Air Transport Agreement is finalised.