Sakharov Prize 2019: meet the finalist and the winner 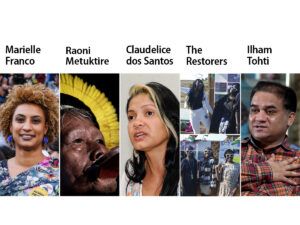 Following a joint vote by MEPs in the Foreign Affairs and Development committees on Tuesday, the finalists for the 2019 Sakharov Prize for Freedom of Thought are:

The European Parliament’s Conference of Presidents (President and political groups’ leaders) will select the final laureate on Thursday 24 October. The prize itself will be awarded in a ceremony in Parliament’s hemicycle in Strasbourg on 18 December.

The Sakharov Prize for Freedom of Thought is awarded each year by the European Parliament. It was set up in 1988 to honour individuals and organisations defending human rights and fundamental freedoms.

Last year, the prize was given to the Ukrainian film director Oleg Sentsov. It is named in honour of Soviet physicist and political dissident Andrei Sakharov and the prize money is 50 000 euros.

Ilham Tohti, an Uyghur economist fighting for the rights of China’s Uyghur minority, is the winner of the European Parliament’s Sakharov Prize for Freedom of Thought in 2019.

The winner was chosen by Parliament’s political leaders on 24 October 2019.

Tohti is a proponent of dialogue and advocate for the implementation of regional autonomy laws in China. In 2014, he was sentenced to life imprisonment on separatism-related charges.  Despite this, he remains a voice of moderation and reconciliation. Since 2017, more than one million Uyghurs have been detained in a network of internment camps.

The prize, consisting of a certificate and €50,000, will be awarded during a ceremony in the Parliament in Strasbourg on 18 December 2019.