Decarbonising the shipping industry is a big challenge, but a Finnish company has spent the last two years showing how we can use wind power to save up to 20 % of energy used by ships on long sea voyages. 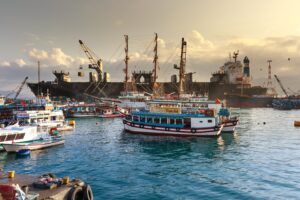 Shipping contributes around one gigaton or one billion metric tons of the roughly forty gigatons of CO2 emissions caused by human activity every year. The proportion is set to grow fast over the next twenty years as efforts are made to reduce carbon emissions produced on land.

Clean tech company Norsepower has designed a system of mechanical sails which harness the wind to provide auxiliary propulsion for ships, thereby easing the load on the main engine and reducing emissions. It has used the EU-funded RotorDEMO project to showcase the technology in a real-life installation at sea over the past twelve months.

The Rotor Sail consists of a tall cylinder made of glass- and carbon fibre which rotates around its main axis driven by an electric motor. The circular movement rotates a thin layer of air around the cylinder. When this interacts with the wind blowing through, it causes a difference of air pressure on either side of the cylinder due to the Magnus Effect. As with conventional sails or the wing of an airplane, this creates thrust and helps drive the ship forward.

Typically comprising two or three cylinders, the system can be retro-fitted to existing ships or integrated into a new build. After installation, there is no need for human intervention; the smart system monitors wind conditions and rotates the mechanism to maximise the benefits.

The windier the better

Designed for ships of 100 metres or more, a typical installation comprises two to three cylinders at a total cost of EUR 1–2 million. “With our delivery prices today, the typical payback period is between three to eight years, but it depends a lot on what kind of ship you have and if you have a windier route, you will get a faster payback,” says Riski.

The system is already on the market and, with the help of RotorDEMO, Norsepower has installed it on another ship as well as the Viking Grace, bringing the total so far to three, with the contract signed for a fourth installation on a new-build cruise ship. Norsepower’s long-term goal is to equip more than 20 000 vessels with Rotor Sails, although Riski acknowledges cost is a barrier.

The economics could soon shift in Norsepower’s favour. Cargo ships’ main fuel is oil refinery waste, a cheap but dirty source of energy. From 1 January 2020, the International Maritime Organization will enforce tighter controls on permitted levels of sulphur in fuel oil, reducing them from the current 3.5 % mass by mass to 0.5 % m/m.