Malta: investigation risks being compromised while Prime Minister is in office 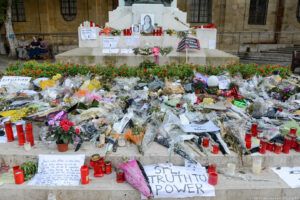 MEPs are concerned about the credibility of investigations into the murder of journalist Daphne Caruana Galizia and the lack of progress on related accusations.

In a resolution adopted with 581 votes to 26 and 83 abstentions, Parliament stresses that “any risk of compromising the investigations (…) must be excluded by all means” and warns that this risk will persist for “as long as the Prime Minister remains in office”.

The text points to the allegations of corruption and money laundering against the Maltese Prime Minister, and in particular his Chief of Staff and the former Minister for Tourism, other government members and private companies and individuals connected to them, regretting that parallel investigations “have not advanced or have not even been launched”.

Protect democracy, the rule of law and fundamental rights

“Developments in Malta in recent years have led to serious and persistent threats to the rule of law, democracy and fundamental rights”, says the EP, highlighting its concerns over freedom of the media, the independence of the police and judiciary, the freedom of peaceful assembly and the separation of powers.

MEPs welcome recent comments by Commission Vice-President Jourová, stating that Malta’s failure to enact judicial reforms could serve as a basis for triggering an Article 7 procedure. They reiterate the need to establish a permanent, independent EU-wide mechanism on democracy, the rule of law and fundamental rights to safeguard the EU’s values.

Parliament also asks for Malta’s investor citizenship and residence schemes to be abolished, as these effectively sell EU citizenship and pose a threat to anti-money laundering efforts, the fight against cross-border crime and the integrity of the Schengen area.

Finally, the text welcomes the creation of an annual “European Daphne Caruana Galizia prize for outstanding investigative journalism”. The necessary arrangements to set this prize up should be finalised as soon as possible.

Following the latest revelations about the murder of investigative journalist Daphne Caruana Galizia in 2017 and subsequent political instability in Malta, a European Parliament delegation travelled to the country from 3 to 4 December to assess the situation on the ground. Its draft mission report will be discussed in the Civil Liberties Committee early next year.