Feasibility analysis of a railway safety service based on EGNSS

There are currently more than 20 rail signalling systems in Europe since each country has developed its own railway infrastructure, equipment and operational rules. This has led to increased costs and technical and operational complexity. Therefore, the European Rail Industry, supported by the EU Institutions, is working on the European Rail Traffic Management System (ERTMS), with an aim to implement a common signalling system for Europe. 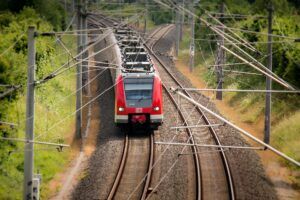 The European Commission’s Directorate-General for Internal Market, Industry, Entrepreneurship and SMEs (DG GROW) has issued a Prior Information Notice (PIN) for a planned call for a new service contract to assess the feasibility of an EGNSS-based safety service for the rail sector beyond 2022 which would make it possible to rationalise rail signalling infrastructure.

The first Space for Innovation in Rail conference in Vienna on 18 and 19 March brought together stakeholders from the rail and space sector in a unique event to discuss the important role of satellite-based positioning technology for the future of the European rail sector. The event highlighted a portfolio of research, innovation and deployment projects being funded by the GSA and the Shift2Rail Joint Undertaking that demonstrate how satellite technologies can provide scalable positioning solutions to increase rail safety, boost capacity and efficiency, and deliver global success for advanced European technologies.

Rail signalling systems are used to safely control railway traffic in order to prevent train collisions. The European Commission (EC) is currently specifying the long-term evolution of the EGNSS programme, including new services for Galileo and EGNOS. The use of an EGNSS receiver in combination with other sensors could result in the provision of an accurate and reliable position which would translate into an overall improvement in the rail system.

Galileo is Europe’s Global Navigation Satellite System (GNSS), providing a highly accurate, guaranteed global positioning service under civilian control. Galileo is operational since the Initial Service declaration at the end of 2016. Full Operational Capability is expected to be reached in 2020.

EGNOS is the European SBAS and augments GPS L1 C/A civilian signal by providing corrections and integrity information for positioning and navigation applications over Europe. EGNOS Version 3, set to enter in service in the near future, will augment both GPS and Galileo constellations in the L1 and L5 bands and will extend the service area to the entire landmasse of EU Member States.

The contract notice will be published in the near future. More information can be found in the Prior Information Notice (PIN).