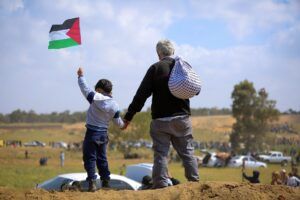 The European Commission will mobilise additional €21 million for the United Nations Relief and Works Agency (UNRWA) on top of €82 million already paid into the programme budget this year to support vulnerable Palestine Refugees in the Middle East.

The announcement was made at the UNRWA annual pledging conference which took place in New York on 25 June. The EU was represented by the Head of Delegation of the European Union to the United Nations, Mr João Vale de Almeida.

The EU acknowledges and supports the essential contribution made by UNRWA to the well-being, protection and human development of Palestine refugees. Generations of Palestine refugees have been educated and provided with opportunities to live in dignity via the efforts of UNRWA.

The European Union is a reliable and predictable supporter of UNRWA and the Agency’s single largest donor. Today’s contribution comes in addition to the €82 million already paid into UNRWA’s programme budget and further humanitarian funding, bringing the European Commission’s global contribution to €107 million in 2019 alone. For the past three years (2016, 2017 and 2018) the total contribution of the EU and its Member States combined reached approximately €1.4 billion.

In parallel, the EU supports UNRWA’s internal reform process while reconfirming the crucial role the Agency plays in providing vital assistance to refugees in need in the Middle East.

Since 1971, the strategic partnership between the European Union and UNRWA has been based on the shared objective of supporting the human development, humanitarian and protection needs of Palestine refugees and to promoting stability in the Middle East.

In June 2017, the EU and UNRWA signed a “2017-2020 Joint Declaration”, strengthening the political nature of their partnership and reaffirming the European Union’s commitment to promoting the rights of Palestine refugees. The Declaration also confirmed the EU’s support for the long-term financial stability of the Agency in a context of intensified budgetary constraints and operational challenges.