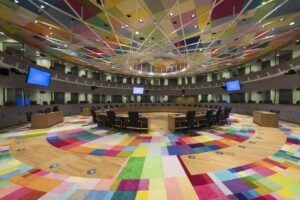 Health ministers will hold an exchange of views and will adopt conclusions in relation to the Novel Coronavirus outbreak.

The Foreign Affairs Council will start at 9.30 and be chaired by the EU High Representative for Foreign Affairs and Security Policy Josep Borrell. Ministers will first have a discussion on current affairs in order to review pressing issues on the international agenda. In this context ministers may focus their interventions on Sahel, Western
Balkans, Middle East and Venezuela. The Council will then hold an exchange of views on relations between the European Union and the African Union, ahead of the publication by the Commission of a new comprehensive strategy with Africa. The Council will then have a discussion on the latest developments in Libya as a follow-up to the outcome of the two Foreign Affairs Councils that took place on 10 and 20 January, as well as the After a brief discussion on EU-India relations, ministers will meet over an informal lunch the Minister of External Affairs of India Subrahmanyam Jaishankar and discuss, among other issues, preparations for the upcoming 15th EU-India Summit, scheduled for 13 March.

The Council will prepare the special meeting of the European Council on the multiannual financial framework for 2021-2027. Ministers will exchange views on the draft European Council conclusions.

The Council is expected to adopt a revised list of non-cooperative jurisdictions for tax purposes in the framework of new conclusions on the matter. The list, which is part of the EU’s external strategy for taxation, is intended to contribute to ongoing efforts to prevent tax avoidance by corporates and promote tax good governance worldwide.
The Commission will present its communication on the review of EU economic governance which was published on 5 February. The Council is due to adopt conclusions on the Commission’s annual sustainable growth strategy and on macroeconomic imbalances in the member states. It should also approve a draft recommendation on the economic policies of the euro area. Finance ministers will prepare upcoming G20 Finance meetings. The agenda also includes issues related to the EU budget.

At this Special meeting of the European Council, leaders will aim to agree on the EU’s long-term budget for 2021-2027, the multiannual financial framework (MFF). The discussion will be based on a proposal from the President of the European Council, Charles Michel, following a round of consultations with all the EU heads of State or Government. In December 2019, the European Council called on President Michel to take the negotiations forward with the aim of reaching a final agreement. The multiannual financial framework (MFF) sets the limits for EU spending – as a whole and also for different areas of activity – over a period of seven years. The multiannual financial framework ensures that the EU’s expenditure develops in an orderly manner and within the limits of its own resources. The annual budget of the EU has to comply with the MFF.

The half-day meeting will start at 10.00. Education ministers will adopt a Resolution on education and training in the European Semester. They will also hold a debate on the topic ‘Brain circulation – a driving force for the European Education Area’.