EDA’s Chemical, Biological, Radiological Nuclear Surveillance as Service (CBRN SaaS) project entered its operational phase. Representatives of the 12 industry members of the consortium in charge of implementing it met for the first time albeit only remotely due to the Covid pandemic.

The aim of the Austrian-lead project, initially launched as a PESCO project but then handed over for the first phase to EDA for practical implementation, is to develop a rapidly deployable 24/7 chemical, biological, radiological, and nuclear surveillance capability.

The main expected output of the EDA Cat B project will be a technical demonstrator of an operational plugin module built on unmanned ground and aerial systems equipped with a variety of sensors to deliver real time CBRN surveillance, detection and incident data to create a recognized CBRN picture for both civilian and military purposes. The new equipment will represent a major enhancement of participating Member States’ defence capabilities and potentially also benefit future CSDP missions and operations, as well as NATO and UN operations.

A project open to all EDA Member States

Besides Austria, Croatia, Hungary and Slovenia are also participating in this PESCO project. However, since CBRN SaaS has been established as an Agency ad hoc project in the meantime it is now also open to other EDA Member States countries.

After the project arrangement between EDA and the four participating Member States became effective on 12 December 2019, the project contract was signed on 19 November 2020 by EDA, on behalf of the contributing Member States, and the Austrian Institute of Technology (AIT), on behalf of the consortium. This was followed by an official kick-off meeting between EDA and AIT last December.

In the meantime, the consortium leader (AIT) conducted extensive negotiations with the defence industries of the four contributing Member States to form the consortium. The particular challenge in uniting the different companies was to meet the demanding capability requirements set before. Now that the consortium is complete (see list below), the practical work to develop a technological demonstrator can start. Based on different work packages that have been defined and assigned to the various individual companies, the objective is now to have a fully functional technical demonstrator available by spring 2023. Afterwards, in the course of 2023, it will be tested in each of the contributing Member States under various realistic scenarios. The CBRN SaaS Cat. B project is scheduled to be fully completed by 1 December 2023. 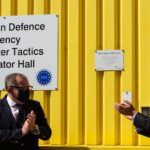