Parliament marks 30th anniversary of the fall of the Berlin Wall 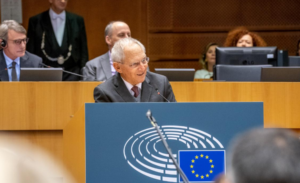 Parliament commemorated the fall of the Berlin Wall during a ceremony in Brussels on 13 November.

Parliament President David Sassoli and Bundestag President Wolfgang Schäuble paid tribute to the German citizens who gained independence when the wall fell in 1989, but warned of the danger of losing the hard-won values of freedom and democracy and called for EU unity and cooperation.

The wall that had divided East and West Berlin since 1961 helped reunite Europe when it fell on 9 November 1989, ushering in a new era for millions of Europeans. Sassoli warned that the principles on which European democracy are based are not irreversible. He said it must be defended from external pressures as well as internal threats, such as the revival of antisemitism, xenophobia, racism and nationalism.

Bundestag President Schäuble called the fall of the Berlin Wall and the removal of the Iron Curtain “unprecedented in history”. Ii is needed to remain aware of what is possible when people work together for something. Particularly in a parliament that serves political purposes but which must always fight for the common good and the wellbeing of all.