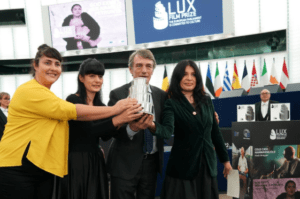 “God Exists, Her Name Is Petrunya”, by Teona Mitevska, has won the 13th LUX Film Prize, President Sassoli announced in Strasbourg on Wednesday.

“It is not always easy to deal with the complexities of our daily work without getting caught up in the technicalities of parliamentary activities. We must also be able to communicate emotions and use new languages. The LUX Prize provides us with an extraordinary tool to accompany us in this endeavour. We must seize the opportunity to examine issues such as immigration, the right to healthcare, feminism and political ethics through the films showcased by the LUX Prize. Tackling the climate emergency, our colonial past, or discussing our model of society through cinema is a stimulating challenge that must be encouraged. We are the only Parliament in the world that awards a film prize. Let us be proud of it.”

The President added: “I want to say once again: we must be particularly proud of the LUX Prize, our Parliament’s prize, of the directors and authors we have had the privilege to meet. Long live freedom of expression, long live European cinema, long live the LUX prize!”.

“God Exists, Her Name Is Petrunya” by Teona Mitevska, is co-produced in North Macedonia, Belgium, Slovenia, Croatia and France. It tells the story of a young unemployed woman who wins the race for the holy cross during the Orthodox ceremony of Epiphany. She suddenly has access to a religious tradition usually only open to men. The film is seen as a significant contribution to the feminist struggle against conservative societies.

The other two films shortlisted for the 2019 prize were: The documentary “Cold Case Hammarskjöld”, a Danish, Norwegian, Swedish and Belgian co-production by the Danish director Mads Brügger and “The Realm” by Rodrigo Sorogoyen, coproduced in Spain and France.

A press conference by EP Vice-President Klara Dobrev (S&D, HU), Culture Committee Chair Sabine Verheyen (EPP, DE) with the directors and producers who worked on the three films is scheduled after the award ceremony, for 15.30. Watch live here.