The number of people fleeing the Russian onslaught in Ukraine surpassed 874,000 as of Wednesday morning New York time, data from the UN refugee agency, UNHCR, has revealed.

More than half have headed west to Poland, according to a new UNHCR operational data portal that is keeping track of refugee arrivals in neighbouring countries.

Others have found shelter in Hungary, Moldova, Romania, Slovakia and beyond. Nearly 43,000 have also moved to the Russian Federation.

As the conflict intensifies, families have been escaping Ukraine any way they can.  Some have been walking long distances in freezing temperatures, the UN Children’s Fund (UNICEF) has reported.

Tania, who is from the city of Chernivtsi, located in western Ukraine near the border with Romania, had to make a snap decision to leave home with her family.

She escaped with her sister Sophia, 19, and daughter Mia, 2, just days after Russia launched the military offensive on 24 February.

“The decision was taken in just a few moments, because the situation in Ukraine is very hard and you don’t know what it will be the next minute,” she told UNICEF.

© UNICEF/Alex Nicodim
Tania (right), stands with her sister and young daughter at the Siret border crossing between Romania and Ukraine.

UN agencies are working around the clock to support the displaced Ukrainians flooding across western borders, half of whom are children.

UNHCR has been in the region for years and is coordinating the refugee response together with sister UN agencies and partners, in support of national authorities.

In Poland, for example, staff are supporting the authorities with registering refugees and providing them with accommodation and assistance.

Families on the move need basic necessities such as shelter, food and water, while children traumatized by the violence they have witnessed also require psychosocial care, UNICEF said.

Agency staff are at the Palanca crossing point on the border between Moldova and Ukraine, where a temporary refugee centre has been established.

The team has delivered several tons of desperately needed basic hygiene products, such as disinfectant, diapers and wipes.

UNICEF is setting up ‘Blue Dot’ safe spaces at border points and other key locations in receiving countries to support delivery of emergency services to families.

These centres were crucial during the refugee and migrant crisis in Europe in 2015-2016.

Unaccompanied and separated children can also get help, and there are places where boys and girls can play.

Nine-year-old Yaroslav and his mother, Vica, were planning to cross into Romania after travelling several days from their hometown, Kherson, in southern Ukraine.

“Our family is there. All the time they are sheltering. It’s a disaster,” said Vica. “We have a couple of friends in Europe, maybe we can go there, we don’t know. Maybe Spain, but I’m not sure right now”.

Vica has spoken with friends who have stayed behind in Kherson. “All the kids there are terrified to death, hiding in bathrooms, in the shelters, hiding in basements,” she said.

The UN has launched a $1.7 billion appeal to provide urgently-needed assistance in Ukraine and to support refugees and neighbouring countries hosting them.

It is estimated that 12 million people inside Ukraine will need relief and protection, while more than four million refugees may need protection and assistance in the coming months.

“This is the darkest hour for the people of Ukraine,” said Martin Griffiths, the UN humanitarian affairs chief.

“We need to ramp up our response now to protect the lives and dignity of ordinary Ukrainians. We must respond with compassion and solidarity.” 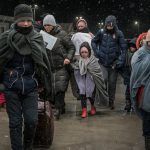