The economic accounts for agriculture show that total agricultural output in the European Union (EU) stood at €434.3 billion in basic prices in 2018, slightly up (by 0.6%) compared with 2017. 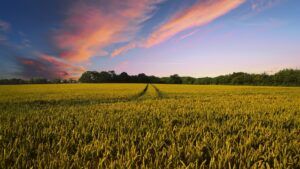 Increases for wine, grapes and grain maize; decreases for pigs and milk

A price change or a volume change, or a combination of the two, influence the value of agricultural output. EU animal output decreased in value (-2.4%) in 2018 compared with 2017, with volume up by 1.2% and prices down by 3.5%. The lower value in 2018 was mainly due to decreases of 7.4% for pigs, 3.2% for milk and 1% for cattle, mostly as a result of decreases in prices.
The value of crop output increased in the EU by 2.7%, with volume up by 3.5% and prices down by 0.8%. The rise was mainly due to increases of 23.7% for wine, 14.2% for grapes, 11.6% for grain maize, 8.8% for potatoes and 7.7% for fruits.
Although the value of agricultural services and other agricultural activities (inseparable) increased in 2018 compared with 2017, their impact on the overall evolution of agricultural output is not significant.