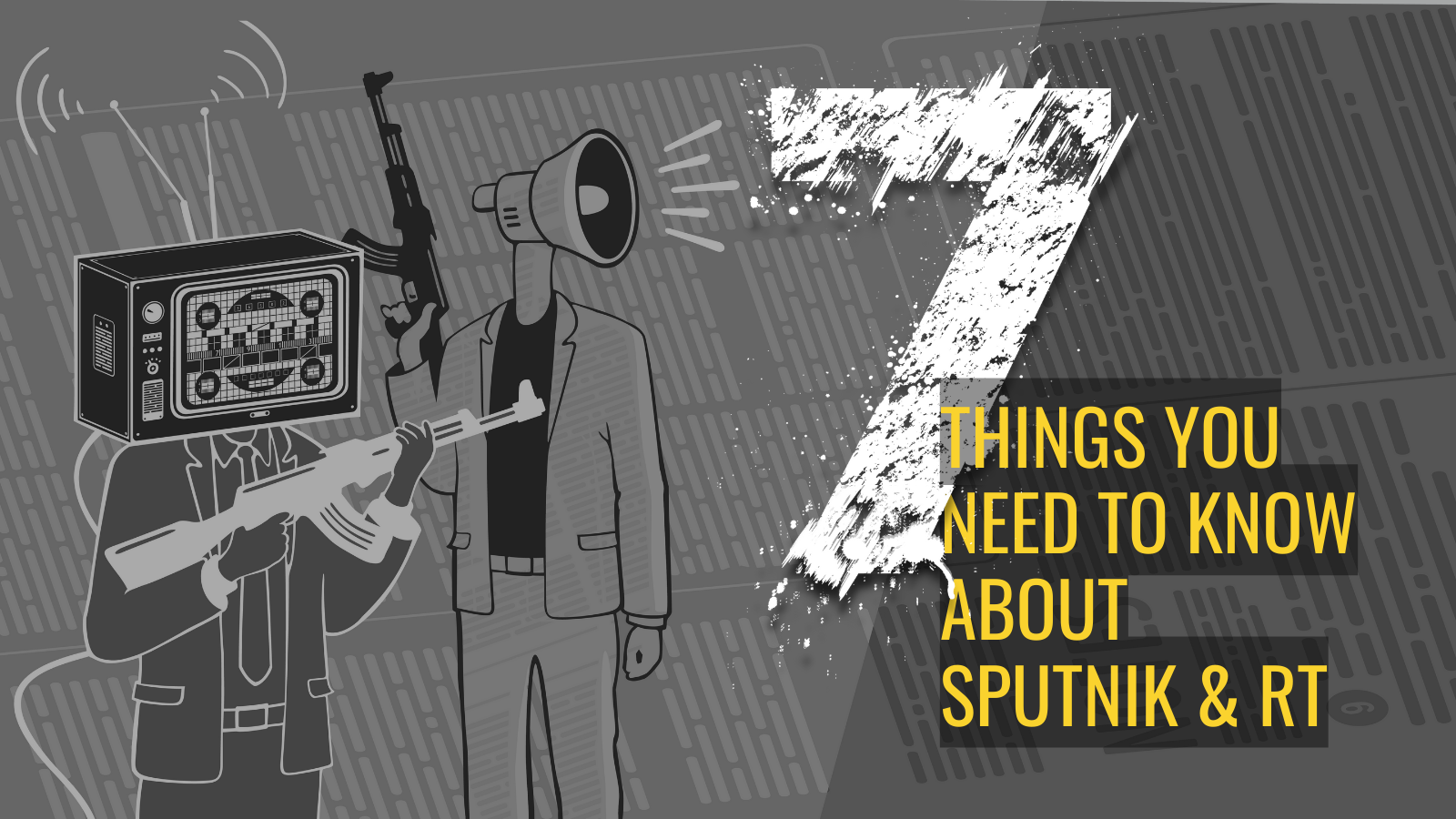 The European Union has adopted sanctions against the Kremlin’s weapons of deception: Sputnik and RT. Their broadcasting activities were urgently suspended (opens in a new tab)in the EU, until the Kremlin’s aggression against Ukraine is put to an end and until Russia ceases to conduct disinformation and information manipulation activities against the EU and its Member States.

These are exceptional, targeted and temporary measures, taken in a very specific, unprecedented context – Russia’s military aggression against Ukraine.

These measures are no “censorship” or “general ban” and strike a careful balance: they respect fundamental rights and only restrict them in a proportionate manner as part of the legally based sanctions regime. This is part of the EU’s reaction to a clear threat to European peace and security.

The EU sanctions do not prevent staff from working for these outlets to carry out their duties. Notably though, following Russia’s invasion to Ukraine, a number of RT employees have resigned(opens in a new tab) throughout the world.

The EU sanctions against RT and Sputnik result in temporary suspension of broadcasting or emission rights to disarm the Kremlin’s instruments of informational war – at the time when it is waging an actual brutal war against Ukraine.

RT and Sputnik may look and sound like international media outlets, but they are not. They function with one overarching goal: to facilitate and support the Kremlin’s policies abroad(opens in a new tab) with means of disinformation and information manipulation. RT and Sputnik and their social media offshoots aim to exacerbate fragmentation and polarisation and undermine democracies, obfuscate facts of the Kremlin’s violations of international law, and manufacture support for Putin’s war.

7 things you need to know about RT & Sputnik: 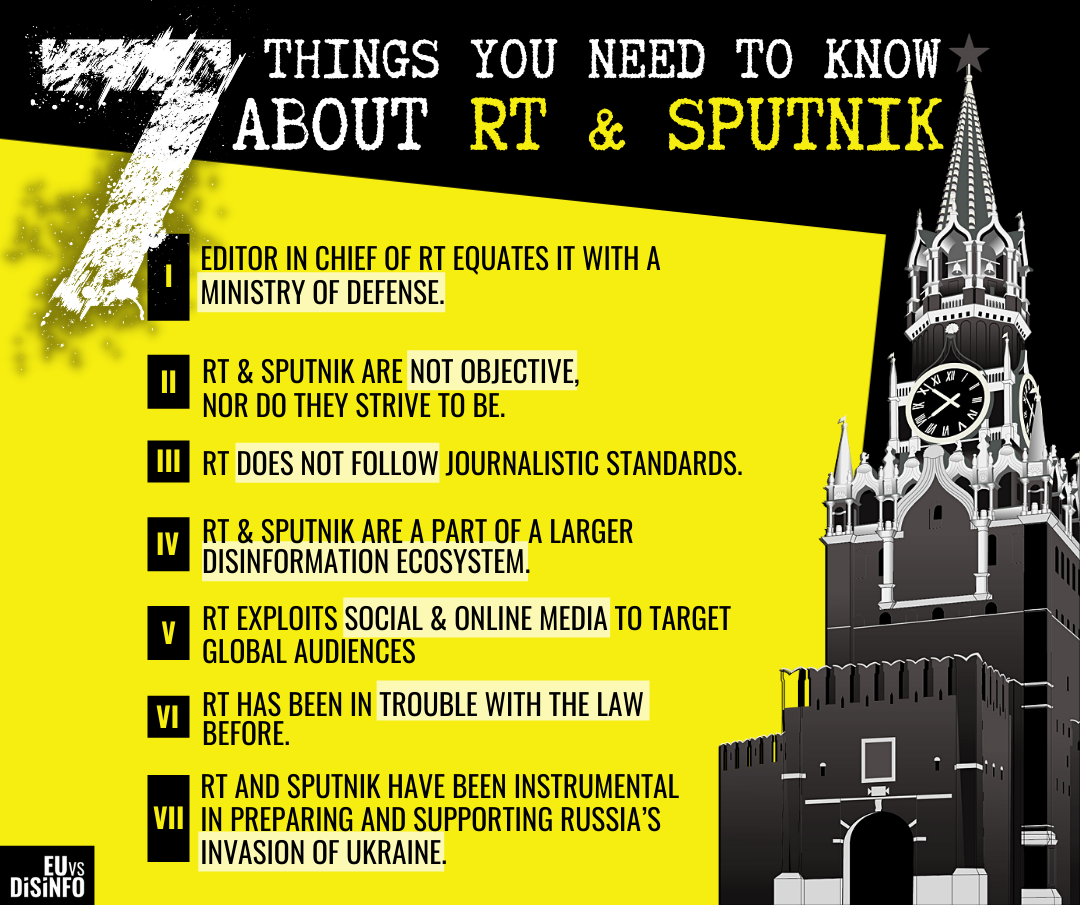 1. RT and Sputnik are not media organizations, but the Kremlin’s weapons of deception.

RT has defined its mission in military terms. Its editor-in-chief Margarita Simonyan, has publicly equated RT’s importance with that of Russian’s need for a Defense Ministry. According to her, RT is capable of “conducting information war against the whole Western world,” using “the information weapon. RT’s strategic aim is to “conquer” and to “grow an audience” in order to make use of access to this audience in “critical moments”.

RT is included in an official list of core organizations(opens in a new tab) of strategic importance for Russia. Sputnik was created by a Presidential decree(opens in a new tab), with the aim to “report on the state policy of Russia abroad.” RT receives millions of roubles from the Russian state every year. For example almost 23 billion roubles or €325 million at the time, were designated for RT in the Russian federal budget draft for 2020. Russia’s overall budget for state media was nearly €1,3 billion in 2021(opens in a new tab).

2. RT and Sputnik are not objective, nor do they strive to be.

Independent journalistic investigations reveal that the chief editor of RT and Sputnik, Margarita Simonyan plays a central role in the media control network, which instructs Russian state-controlled media outlets on what should and should not be covered. She has admitted(opens in a new tab) having a direct secure line to the Kremlin via a “yellow phone.”

The head of “Rossiya Segodnia” Dmitry Kiselyov, who was sanctioned by the EU in 2014, has told his employees that “the period of impartial journalism is over,” and that “objectivity is a myth.”

3. RT employs people with background in journalism, but does NOT follow international journalistic standards.

RT has been serving the Kremlin’s agenda in the West under the guise of “alternative” journalism(opens in a new tab), aimed at counteracting the alleged bias of “mainstream media.” It has relied on appearances of Western politicians, academics, journalists, and other influential public personalities to boost its credibility(opens in a new tab), and uses the op-ed format prolifically to disguise disinformation as an opinion.

But appearances are exactly that – RT cannot disguise its fundamental lack of public accountability, transparency and editorial independence. A far cry from international media standards that international public broadcasters adhere to, RT is opaque(opens in a new tab) about its budget, supervisory structure, and oversight mechanisms.

4. RT and Sputnik are a part of a larger disinformation ecosystem.

There is a well-documented relationship between RT and Sputnik and other pillars in the Russian disinformation ecosystem(opens in a new tab) – a collection of official, proxy, and unattributed communication channels and platforms that the Kremlin uses to create and amplify misleading and manipulative narratives.

RT and Sputnik facilitate and engage in cyber-facilitated influence operations,(opens in a new tab) including those that have been attributed to the Russian Military Intelligence GRU.

5. The real impact of RT lies in online and social media.

RT is best understood not as a TV channel with social media presence, but as a social media operation with professional TV capabilities. A 2018 study(opens in a new tab) by UK media regulator Ofcom ranked RT’s popularity second to last “among adults who use TV for news,” with 2 percent of the total audience share.

The reach of RT is far greater on social media. In the beginning of 2020, RT boasted 10 billion views across multiple YouTube channels. Yet RT’s mass appeal on social media has been contested by international media (opens in a new tab)and Russian activists(opens in a new tab). Investigations revealed that RT have been artificially inflating online viewership figures to boost its notoriety and relevance as a media outlet.

RT has actively tried to occupy the information space within the EU with a huge volume of articles on issues of key importance to the Kremlin, like the obfuscation of facts about the poisoning of Alexei Navalny. RT’s use of sensationalist, misleading headlines to boost social media engagement combined with lax copyright policies created a dangerous ecosystem for RT content to be easily amplified by proxy websites – either unwittingly or purposefully.

Throughout the years RT has created multiple spin-offs tailored specifically for social media propagation, where entertainment content comes spiced up with the “Russian perspective”. Hidden behind the smokescreen of multiple offshoots RT tailors and targets messages to diverse audiences. RT and its satellite outlets have also gone at lengths to disguise their connections with each other and with the Russian state.

6. RT has run into trouble before.

The EU sanctions against RT and Sputnik are exceptional, targeted and temporary measures, taken in a very specific, unprecedented context – Russia’s military aggression against Ukraine – but the Kremlin’s mouthpieces have run into trouble before.

7. RT and Sputnik have been instrumental in bringing forward and supporting Russia’s military aggression against Ukraine.

In 2021 RT’s editor in chief, Margarita Simonyan attended a conference in Donetsk, where she called(opens in a new tab) on “Mother Russia to bring Donbas home,” literally calling for the violation of Ukraine’s territorial integrity.

Just weeks before Putin’s orders to start the war, RT riled up its audiences by stating that “Ukrainians wanted Russian blood.”

As the Russian missiles are falling on Ukrainian cities, both RT and Sputnik continue to disinform and obfuscate the true nature and extent of Putin’s war against Ukraine.