The Government adopts with the Autonomous Communities the Agreements of the island of La Palma to give a united response to the impact of the war in Ukraine.

Inicio » Noticias UE » Asuntos Institucionales » International Politics and Cooperation » The Government adopts with the Autonomous Communities the Agreements of the island of La Palma to give a united response to the impact of the war in Ukraine. 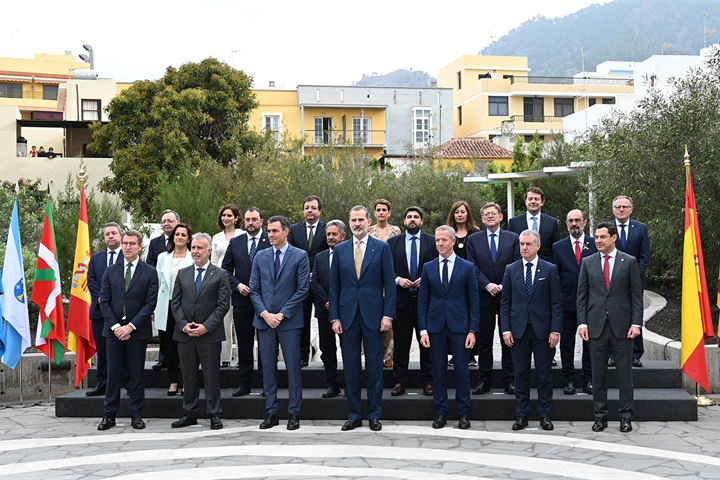 The XXVI Conference of Presidents, chaired this Sunday by Pedro Sánchez on the island of La Palma, has adopted, with the agreement of all the autonomous communities and cities, the Agreements of the island of La Palma to give a unity response to the impact of the war in Ukraine after the military aggression of the Russian Federation.

“Today Spain comes out stronger from this Conference of Presidents because we are more united”, stressed the spokesperson of the Government and Minister of Territorial Policy, Isabel Rodríguez, in relation to the unity and unanimous consensus of all the administrations to respond to the impact of the war in Ukraine.

The meeting of the President of the Government with all the regional leaders has agreed to strengthen the cooperation mechanisms between the Executive and the autonomous communities around four main axes: humanitarian aid and reception of refugees, response to the rise in the price of energy, deployment of European funds and articulation of the National Response Plan to the consequences of the war in Ukraine, with the aim of strengthening and ensuring institutional cooperation to respond to the socio-economic consequences of the Russian invasion.

In this way, the Conference of Presidents has expressed its unity, in support of the Executive, against the invasion of Ukraine and has taken the first step to achieve a comprehensive plan of response to the crisis, which will be implemented through the cooperation bodies. In this regard, the Minister Spokesperson stressed that the Spanish Government practices “co-governance out of conviction”.

The XXVI Conference of Presidents has agreed to reinforce the cooperation between all the administrations to articulate the National Plan of Response to the consequences derived from this war, a dynamic plan open to dialogue with the social agents, the parliamentary groups and the autonomous communities.

The Government has reaffirmed Spain’s energetic and unanimous condemnation of Russia’s aggression, as well as its unequivocal support for Ukraine. Likewise, the Executive has asked for institutional cooperation in relation to humanitarian aid and has committed itself to guarantee economic resources to the autonomous communities for the reception of people affected by the war. In this matter, there are already 5,400 places available in the state system and 12,800 in the autonomous communities and city councils.

In the energy field, the Government has asked for the support of the autonomous communities for the proposal to unlink gas and electricity prices, in order to reduce energy dependence on Russia through gas interconnections and the promotion of green hydrogen and renewable energies.

In fiscal matters, the Executive has underlined the fiscal effort carried out with the reduction of all taxes on electricity, which means between 10,000 and 12,000 million Euros until the end of the year in tax reductions and suspensions. In addition, the Government has expressed its willingness to continue talking with the autonomous communities on this matter.

At the same time, the Conference has agreed to improve the functioning of technological services and cybersecurity, as well as to strengthen cooperation and collaboration with the autonomous communities in this area.

Acceleration of European funds as a basis for recovery

The execution of European funds has also been one of the central points of the XXVI Conference of Presidents. The Government has agreed with the Autonomous Communities to reduce and speed up the procedures and deadlines for the execution of projects for the development of renewable energies, energy efficiency or housing rehabilitation.

The Executive has urged to leave aside the partisan struggle in the management of the European funds and to accelerate the execution of the already allocated funds, with the aim of consolidating the economic recovery and continuing on the path of job creation.

Commitment to the recovery of La Palma

The celebration of the XXVI Conference of Presidents is added to the Act of Homage to the Exemplary People of La Palma, organized by the Government and presided by Their Majesties the King and Queen of Spain this Saturday, March 12th, as a sign of the commitment of the Executive with the recovery of the Canary Island after the volcanic emergency caused by the eruption of the Cumbre Vieja volcano.

The event was attended by His Majesty the King, Felipe VI, and the participation, on behalf of the Spanish Government, of the Vice-Presidents Nadia Calviño and Teresa Ribera and the Ministers José Manuel Albares, María Jesús Montero, Fernando Grande-Marlaska, Félix Bolaños, Isabel Rodríguez, Carolina Darias and José Luis Escrivá.