Negotiations on a future partnership started on Monday the 2nd. 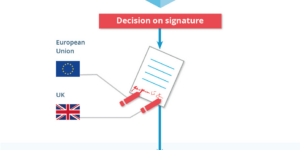 David McAllister, Chair of Parliament’s UK Coordination Group, following the start of EU-UK negotiations on a future partnership on Monday 2 March gave a statement focusing on:

“With negotiations kicking off today, we are entering into a crucial phase that will set the tone for the future EU-UK relationship. The European Union is united; mutual trust and respect should prevail to ensure the best possible outcome for both parties. EU negotiator Michel Barnier and his team can count on the European Parliament’s full support”.

“As stated in our latest resolution, the EU must do its utmost when negotiating with the UK to guarantee the European Union’s interests. We take note of the UK’s mandate published on 27 February. Members reiterated in their resolution their determination to establish a future relationship with the UK that is as close as possible, noting nonetheless that this will have to be different from that enjoyed by the UK as a member state of the EU. To this end, trust is essential. It is also crucial that the UK government, in the upcoming negotiations, quickly clarifies its approach to the implementation of the Withdrawal Agreement, particularly with regard to the protocol on Ireland and Northern Ireland.”

The European Parliament adopted its latest resolution on EU-UK future relations on 12 February. In the text, MEPs called for future fair competition and a “level playing field” to be guaranteed through robust commitments, and “dynamic alignment” of EU-UK rules.

EU government representatives in the Council gave the go-ahead for talks to start and adopted the EU’s negotiating directives on 25 February, effectively allowing the European Commission to begin negotiating with the British government on behalf of the EU.

Parliament’s “UK Coordination Group”, led by Foreign Affairs Committee Chair David McAllister (EPP, DE), will liaise with the EU Task Force for Relations with the United Kingdom. The EP will follow closely the work of the EU negotiator Michel Barnier and continue to influence the negotiations through resolutions. The final agreement will need the approval of the Parliament as a whole.