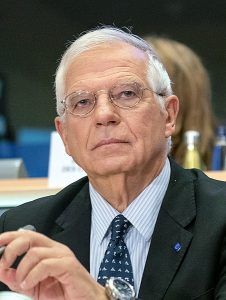 This is not the East against the West. This is not a remake of the Cold war. We are defending the sovereignty of the nations, all nations.

Also, Ukrainian Foreign Minister [Dmytro] Kuleba connected with the [Foreign Affairs] Council remotely, because he is Ukraine obviously, to give an overview of the latest developments on the ground, and the urgent needs of Ukrainians and the atrocities committed by the Russian forces who continue bombing indiscriminately several Ukrainian cities.

They are shelling residential housing, schools, hospitals, and other civilian infrastructure. It looks like they want to destroy Ukraine.

The UN Human Rights Council, as you are aware, has voted today on the urgent establishment of a commission of inquiry to address these violations of human rights and international humanitarian law.

Taking into account that right now the figure of the number of people who are escaping Ukraine and crossing the borders of the European Union and also other countries like Moldova, is today more than one million people and it is increasing very quickly. More will come. We are above one million in less than a week.

But we strongly call for a humanitarian corridor. The International Red Cross is not able to enter the country and we need green corridors for the Red Cross to be able to help the Ukrainian people.

People – children, mothers, fathers – need food, need basic items. I saw it yesterday myself in my visit to Moldova, where I visited a refugee reception centre. I have seen many of them around the world, but it is heart-breaking. You never get used to these kind of things.

[The President of Russia, Vladimir] Putin must allow humanitarian aid to go into Ukraine.

More dangerous than this, overnight, we saw the Russian attacks in the direct vicinity of Ukraine’s nuclear power plant – the biggest Ukrainian power plant has been attacked. And this is unacceptable because it can produce catastrophic consequences that can provoke an ecological and humanitarian catastrophe for the entirety of Europe. The Russia army has to respect emergency safe zones around nuclear sites, and we need to ensure the safety of these zones because the safety of the entire European continent can be affected.

We have been discussing with Secretary Blinken, and as Antony Blinken said that we are seeing a historic moment of the cooperation between the European Union and the United States, and the reinforcement of the Euro-Atlantic partnership. Together, we led the way of imposing the most far-reaching sanctions packages ever adopted. We must now ensure that they are fully implemented – because it is not enough to announce, to agree and to announce. But they have to be implemented, loopholes have to be closed and I hope that they will undermine the Russian war machine.

President Putin intended to divide us, but he achieved just the contrary: we are more united and more determined then ever, much more than before the Russian aggression. And Russia is completely isolated by the international community, as the vote at the [United Nations] General Assembly clearly showed yesterday.

And today, the [UN] Human Rights Council voted again and established an independent commission of inquiry into the humanitarian situation in Ukraine. And also the result was very clear – 32 votes in favour, 2 against, 3 abstentions.

I want to stress the fact that our sanctions are targeted. They are already producing results. And the aim is not to harm the Russian people, but to pull the rock out from under the Kremlin’s war machine. It is, however, unfortunately as a fact, that they will also affect people who are not in the inner circle of the Kremlin. And, until a certain point, ordinary people will also suffer the consequences of Putin’s war – because let us call it the way it has to be called – Putin’s war. And only Putin can end it.

We have to locate them and seize their assets, because the Russian regime gets its wealth from corruption and tax evasion. We need to combat this and turn off the tap of money flows financing this senseless war.

In order to stop the flows of money that finance the Russian army and the Russian war, today we have also discussed the need to accelerate the green energy transition to further reduce our energy dependency on Russia.

Allow me to say something about my visit to Moldova together with Commissioner [for Enlargement and Neighbourhood, Olivér] Várhelyi. Both of us, we underscored the solidarity of the European Union with Moldova and conveyed our gratitude and appreciation to the people of Moldova for their efforts and solidarity in welcoming refugees in a large number. Moldova is not the richest country in Europe and it has been receiving such a big number of refugees that, in proportion to its population, is like if Spain would have received more than 1 million refugees.

The situation in Moldova is fragile and they need urgent support. We will provide it.

Finally, allow me to underline a very clear political assessment: this is not the East against the West. This is not a remake of the Cold war. We are defending the sovereignty of the nations, all nations. We are defending the territorial integrity of a state, all states. In the East, in the West, in the North and in the South. It is not again the battle of two hemispheres. We are defending international law, the sovereignty of states, their territorial integrity and the no violation of the borders. This is something that is valid for anyone in the world. 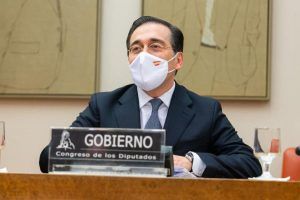 For the first time in the history of the EU, the directive for the temporary protection of refugees from the war in Ukraine was approved. Also, during the meeting there was a thorough analysis of how to cope with the energy crisis and reduce dependence on Russian gas.

The holding of both meetings showed the seamless unity among the Allies and between the EU and NATO to put an end to an unjustifiable war.

Within the framework of these meetings, Minister Albares also held several bilateral meetings with the European Commissioner for Neighborhood and Enlargement, Oliver Varhelyi, and with the Polish Foreign Minister, Rau Zbigniew, and the Italian Foreign Minister, Luigi Di Maio. At these meetings, issues related to the Russian aggression and its collateral effects were discussed.