Partnership and cooperation agreement between the European Union and Colombia 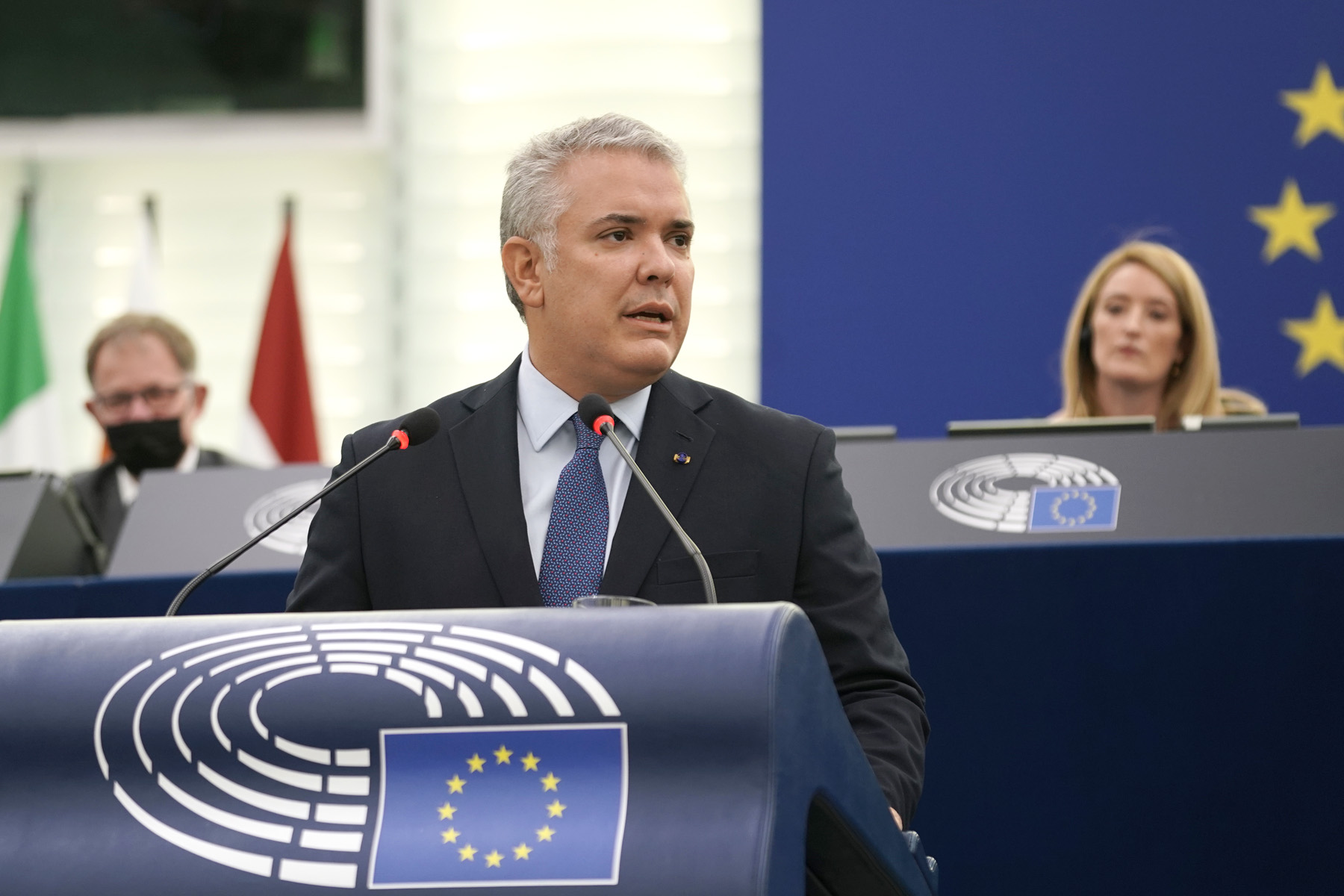 In his address to MEPs, Colombian President Iván Duque welcomed EU support for the country’s peace process and for hosting displaced Venezuelans.

Speaking at the start of Parliament’s session, EP President Roberta Metsola conveyed her solidarity with the victims of Colombia’s decades-long conflict. President Metsola also acknowledged that Colombia has led by example in welcoming 1.8 million displaced Venezuelans and granting them access to essential services.

In his speech in Strasbourg’s hemicycle, President Duque advocated international cooperation and multilateralism, saying: “Europe’s needs Latin America, and Latin America needs Europe”. Referring to the increasing geopolitical tension caused by Russian threats to Ukraine, President Duque said all countries must be sovereign and able to decide freely – without intimidation – whether to join a multilateral organisation. In case of military aggression against Ukraine, “Colombia will accompany the sanctions imposed at international level”, he said.

Duque said Colombia has managed to respond to the worst migration crisis in Latin America without turning to xenophobia. He welcomed international support, but asked for the acceleration of the disbursement of aid that has been committed to help improve the situation. “But what is truly necessary is end the root cause of this tragedy, the opprobrious dictatorship of Nicolás Maduro, that every day generates more diaspora and a worsening of the social fabric of Venezuela”, he added.

The Colombian President also welcomed the announcement that the European Parliament will send observers to the electoral processes in Colombia in March (legislative elections) and May-June (presidential elections).

You can re-watch the formal address and the press conference by Presidents Metsola and Duque.

The European Commission announced on Monday, February 14, the launching of preparations to negotiate an association and cooperation agreement with Colombia, a country with which Brussels also showed its harmony in the fight against climate change during meetings between the President of the Latin American country, Iván Duque, and representatives of the Community club.

The European Union currently has a multi-party free trade agreement with Colombia, Ecuador and Peru.

High Representative/Vice President (HR/VP) Josep Borrell met with Colombian President Iván Duque Márquez on February 14. The meeting was an opportunity to further strengthen the close and long-standing relations between the EU and Colombia.

HR/VP Borrell stressed that as the EU and Colombia are embarking on the path towards an ever deeper and broader partnership, the implementation of the historic 2016 Peace Agreement will remain at the center of the EU’s engagement.

He also expressed the EU’s solidarity with Colombia in the face of the COVID-19 pandemic, commending the Government’s successful vaccination campaign, and reiterated the commitment to work closely together to achieve a green, inclusive and digital post-COVID recovery. HR/VP Borrell highlighted the recent waves of social protests in Colombia and concerns about human rights abuses and violations.

The EU and Colombia have an overlapping agenda, especially on climate change, biodiversity and the environment, and will continue to work closely together bilaterally, regionally and multilaterally.

European Commission President Ursula von der Leyen highlighted Colombia as an “indispensable partner” in the fight against climate change in an appearance with Duque, where they witnessed the signing of a new agreement to cooperate further on sustainable development.

I am very happy to welcome President Duque here today, it is a pleasure. And it is a pleasure to receive a really close friend and like-minded partner. Today we not only have many joint projects, but we have something very concrete. We are signing today, with Commissioner Sinkevičius and Minister Correa, the Joint Declaration on Environment, Climate Action and Sustainable Development.

Colombia has great ecological wealth, this is very impressive, and is therefore an indispensable partner in the fight against climate change and our transition to environmental action. We both share a strong determination in this regard and will work hand in hand on our green agenda. So today’s Declaration is another important step in that same direction. Thank you very much and a warm welcome again.

“There is no planet B and we have to take all actions,” stressed the president, who recalled that his country has set out to be carbon neutral by 2050 and to reduce greenhouse gas emissions by 51% by 2030.

In addition, he noted that they have committed to declare this year 30% of the Colombian territory as protected areas, both maritime and terrestrial, and to expand national parks.

He assured that Colombia has become “a leader worldwide in energy transition” and concluded that the declaration signed in Brussels “shows that we have reached the highest peak of the relationship between the EU and Colombia”.

After signing the memorandum, the Colombian president attended an event together with the European Commission vice-president in charge of climate transition, Frans Timmermans.

“We will achieve climate neutrality by 2050, we want to be the first continent to do so. If Latin America wants to beat us, we invite it to do so,” said Timmermans, who assured that if that happens “it would be wonderful,” because “everybody wins.”

Duque asked the EU to create an emissions trading market “based on transparency and fair CO2 prices”, which would contribute to “transform” Colombia towards a sustainable economic model.

Colombia is the only Latin American country with NATO partner status and Duque today met with the allied Secretary General, Jens Stoltenberg.

“We exchanged views on deepening cooperation between Russia and China, including their support for the repressive regime in Venezuela. We agreed that all parties should play a constructive role for regional peace and stability,” the Norwegian politician said in a statement to the press alongside Duque.

Stoltenberg noted that Bogota has contributed to NATO’s anti-piracy patrols in the Horn of Africa and that its experts have provided mine clearance training to allies and other partner countries.

EUROEFE: EU and Colombia aim to strengthen their partnership and show harmony on climate