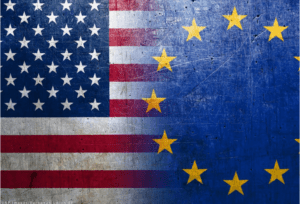 In their Joint Statement of 25 July 2018 in Washington D.C., President Juncker and President Trump agreed to strengthen EU-U.S. strategic cooperation with respect to energy. They came in particular to an understanding on the benefits of expanded exports of U.S. liquefied natural gas (LNG) to the EU gas market.

Since the first cargo in April 2016 U.S. LNG exports to the EU have been increasing substantially and have seen a steep rise after President Trump and President Juncker’s meeting in July 2018 increasing by 272%. As a result, March 2019 recorded the highest volume ever of EU-U.S. trade in LNG with more than 1.4 billion cubic metres.

Top energy business executives from both sides of the Atlantic meet in Brussels to discuss further ways to enhance LNG trade, the role that competitively-priced U.S.-LNG can play on the EU market and the growing opportunities for using LNG in the transport sector. This High-Level Energy Forum, opened by EU Commissioner for Climate Action and Energy Miguel Arias Cañete and U.S. Secretary of Energy Rick Perry, gives American and European businesses the opportunity to chart further actions to fully harvest commercial opportunities in the LNG trade. These will range from new infrastructure for upstream development, liquefaction and re-gasification to pipeline network distribution as well as new business models and financial instruments in a changing market. It also provides U.S. and European decision-makers from companies in the LNG sector with match-making and deal-making opportunities.

The gathering, which is a clear signal of the strengthened of EU-U.S. cooperation in the field of energy, provided a further occasion for EU Commissioner Miguel Arias Cañete to meet with the U.S. Secretary of Energy Rick Perry and discuss broader aspects of EU-US energy relations.

Increased imports of U.S. LNG contribute to the EU’s goal of diversification of energy supply. Competitive, fluid and stable, the EU gas market is the second biggest single gas market in the world after the U.S.

European gas imports are projected to increase in the years to come as its domestic production is decreasing, while demand is projected to remain at a comparable level as gas has been identified as an important transition fuel in the EU’s efforts to decarbonise its economy.

Development of liquefied natural gas capacities in the EU:

The EU has well-developed liquefied natural gas import capacities, with about 150 billion cubic meters currently spare. At the same time, given their strategic importance for diversification and supply security, current capacities are being expanded and new capacities are being developed. Most recent developments include: