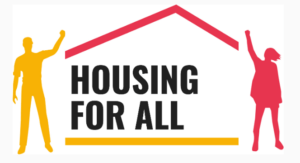 The European Commission has today decided to register a European Citizens’ Initiative entitled ‘Housing for all’.

The objective of the initiative is “to bring about better legal and financial framework conditions to facilitate access to housing for everyone in Europe”. The organisers call on the European Commission to ensure “easier access for all to social and affordable housing, not applying the Maastricht criteria to public investment in social and affordable housing, better access to EU funding for non-profit and sustainable housing developers, social, competition-based rules for short-term rentals and the compilation of statistics on housing needs in Europe.”

Under the Treaties, the EU can take legal action in this area, for example when it comes to internal market rules as well as strengthening economic, social and territorial cohesion in Europe. The European Commission has therefore decided to register the Initiative. The Commission’s decision concerns only the legal admissibility of the proposal. The Commission has not yet analysed the substance.

The registration of this Initiative will take place on 18 March 2019, starting a one-year process of collection of signatures of support by its organisers. Should the Initiative receive one million statements of support within one year, from at least seven different Member States, the European Commission will have to react within three months. The Commission can decide either to follow the request or not, and in both instances would be required to explain its reasoning.