Ministers discussed the Russian military aggression and stood united in their support for Ukraine.

Ministers highlighted the importance of accountability for the gross violations of international law. The EU will support the International Criminal Court’s prosecutor and the Ukrainian prosecutor financially and with staff on the ground. The EU advisory mission will now be deployed on the ground to cooperate in the investigation and collection of evidence.

The EU will continue to support Ukraine politically and financially, as well as to support the Ukrainian armed forces. In this regard, work will continue within the Council on the proposal for an additional 500 million euros to be mobilised under the European Peace Facility.

Ministers also assessed the implementation of sanctions and how to avoid any loopholes. They had a general discussion on what else can be done.

The Council also discussed efforts to reinforce strategic communication and to counter disinformation, including on the topic of rising food insecurity caused by Russia’s aggression against Ukraine. Ministers discussed how to face this challenge of rising food insecurity in other regions of the world, especially in Africa, the Western Balkans, the Middle East and Latin America.

Ministers exchanged views on the Global Gateway and provided guidance to ensure that this initiative pursues a geopolitical and global approach to connectivity. They noted the strategic importance of engaging in global connectivity routes, in particular in the current context.

Ministers discussed the situation in Mali, which has led the EU to temporarily suspend trainings provided by EUTM and EUCAP Mali to the armed forces and the national guard. The lack of progress in the transition process, together with the presence of Russian-affiliated forces in the country and mounting reports of human rights violations and killings of civilians by Malian armed forces and foreign-fighters, required a reevaluation of the EU presence.

Ministers touched upon the Western Balkans in the context of relations and cooperation with the EU. The strategic engagement with the region, complementing to the enlargement process, is even more important in the evolving geopolitical context following Russia’s invasion of Ukraine.

The Council was also informed about the institutional crisis in Libya. The current political stalemate puts at risk the progress achieved over the past year and further delays the prospect of renewing the legitimacy of Libyan institutions through elections.

Spain at the European Council meeting

José Manuel Albares has also attended the meeting together with his European counterparts, focused, as mentioned above, on the developments in the Russian aggression against Ukraine.

The EU foreign ministers first held a meeting with the chief prosecutor of the International Criminal Court, Karim Khan. Spain, together with 41 other countries, supports the investigation of war crimes committed on Ukrainian territory. 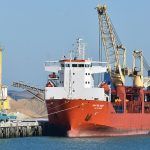