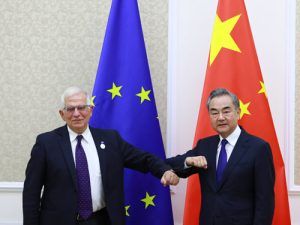 On 7 March, the EU High Representative for Foreign and Security Policy and Vice President of the European Commission Josep Borrell spoke with China’s State Councillor/Foreign Minister Wang Yi. This was their second conversation since the start of Russia’s unprovoked and unjustified military invasion of Ukraine.

High Representative/Vice-President Borrell expressed appreciation for China’s position at the UN Security Council and General Assembly indicating support for territorial integrity, sovereignty of nations and inviolability of borders, as well as for China’s readiness to support cessation of hostilities and dialogue.

The High Representative/Vice-President and the State Councillor/Foreign Minister agreed that a large-scale humanitarian crisis must be prevented.

The High Representative/Vice-President noted the absolute need to stop hostilities immediately, and referred to the highest number of refugees in Europe since World War II and the unacceptable targeting and suffering of the civilian population, including grave violations of International Humanitarian Law. He asked his Chinese counterpart to support the establishment of humanitarian corridors, to allow the evacuation of the civilian population.

They both agreed to continue talks in the next days and looked forward to the EU-China Summit, scheduled for 1 April 2022.