Inicio » EU News » Research and Innovation » Technology » Can life from Earth survive on a planet like Mars?

Some microbes on Earth could temporarily survive on the surface of Mars, new study finds. 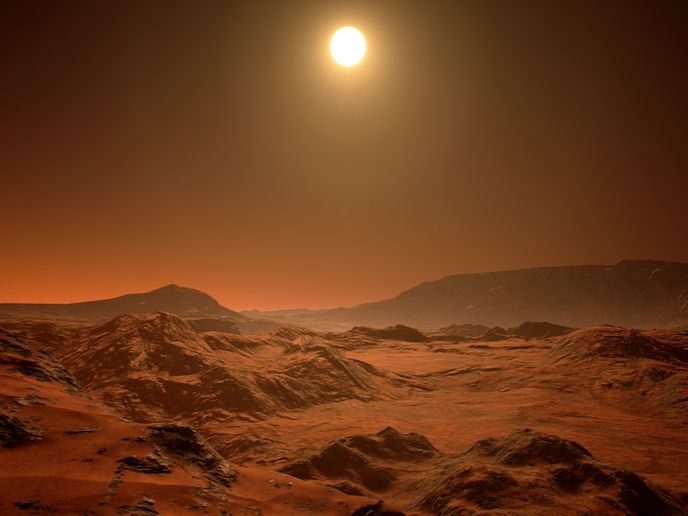 As the Perseverance rover hunts for evidence of past life on Mars’ barren surface, researchers back on Earth are exploring just how difficult it might be for living organisms to survive there today.

Findings published in the journal ‘Frontiers in Microbiology’ reveal that microorganisms from Earth may be able to survive. Scientists from the German Aerospace Center (DLR) and NASA launched an aluminium container with bacteria and fungus into the stratosphere. The two samples were kept in Martian atmosphere conditions and exposed to the Sun’s ultraviolet radiation.

Careful what we bring along to Mars

Some of the microorganisms survived. “We successfully tested a new way of exposing bacteria and fungi to Mars-like conditions by using a scientific balloon to fly our experimental equipment up to Earth’s stratosphere,” commented co-lead study author Marta Cortesão, a PhD student at DLR. “Some microbes, in particular spores from the black mold fungus, were able to survive the trip, even when exposed to very high UV radiation.”

“If a microbe can hack it up there, above much of the protective ozone layer, it just might be able to survive – however briefly – on a journey to the surface of Mars,” co-author David J. Smith from NASA told ‘CNN’.

What does survival mean for space travel?

Spores from the black mold Aspergillus niger and the bacterium Salinisphaera shabanensis managed to endure. “Spores from the A. niger fungus are incredibly resistant – to heat, harsh chemicals, and other stressors – but no one had ever studied whether they could survive exposed in space or under intense radiation like we see on Mars,” explained Cortesão. “This experiment raises a lot of questions about what genetic mechanisms are key to making microbes able to survive. Do they carry ancient evolutionary traits that provide them the ability to withstand harsh conditions, or does the adaptation to their current environment provide protection for many other environmental challenges?”

Smith added these experiments make possible the study of “the microbe’s resiliency in ways that are impossible in the lab,” and that they offer “an opportunity to predict survival outcomes on Mars and help establish the limits of life as we know it.”

In the future, we need to be careful of organisms and other contaminants we take with us in space, or those we may bring back. “This research gives us a better understanding of which microbes could linger in environments once assumed to be lethal, like the surface of Mars, and gives us clues about how to avoid unintentionally bringing tiny hitchhikers with us to off-world destinations,” noted co-author Ralf Moeller from DLR.

“With crewed long-term missions to Mars, we need to know how human-associated microorganisms would survive on the Red Planet, as some may pose a health risk to astronauts,” observes co-lead author Katharina Siems, also a DLR PhD student. “In addition, some microbes could be invaluable for space exploration. They could help us produce food and material supplies independently from Earth, which will be crucial when far away from home. Microorganisms are closely-connected to us; our body, our food, our environment, so it is impossible to rule them out of space travel.”