Members of the Euro-Latin American Parliamentary Assembly (EuroLat), composed of 75 MEPs and 75 representatives of Latin American and Caribbean parliaments, will participate on 13 and 14 April in the Assembly’s fourteenth plenary session, under the title “A fair and inclusive economic recovery in peace”.

Participants include Javi López (S&D, Spain), Chair of the Assembly’s European component, and Óscar Darío Pérez Pineda, Chair of the Latin American part and member of the Colombian Congress. For the first time since the beginning of the COVID-19 pandemic, the Assembly will meet in person.

The Assembly will begin on Wednesday, 13 April, with speeches by EuroLat co-presidents Javi López and Óscar Darío Pérez Pineda, and a representative of the Argentinean Senate. European Parliament President Roberta Metsola and EU High Representative for Foreign Policy Josep Borrell will also participate via videoconference.

A press conference will follow the opening session. The two co-chairs will answer questions from the media at 12:30 p.m. local time (GMT -3) in the Hall of Honor of the Kirchner Cultural Center.

EuroLat members will discuss criminal cooperation and the problem of hate speech online and offline. Given that both regions are underrepresented on the global digital market, the representatives will discuss how to establish suitable environments to attract, retain and incentivise the growth of digital platforms. Another issue on the agenda is the scrutiny of trade negotiations between the two blocks and the monitoring of trade agreements.

On social issues, discussions will focus on culture as a means to boost relations between the two sides. Furthermore, they will assess the challenges and opportunities arising from the pandemic for the reform of education systems. In addition, they will vote on a report on the circular economy and will address the “Rights of nature”.

In addition, a Working Group on Food Security and the Fight against Hunger has been set up to stress the need to facilitate the post-pandemic recovery process and to address the effects of the war in Ukraine on the global food market.

Other discussions will focus on the fight against drug trafficking, and the state of women’s sexual and reproductive health and rights, as well as LGBTI rights in the EU and Latin America.

Creation and composition of EuroLat

The Euro-Latin American Parliamentary Assembly (EuroLat) is the parliamentary institution of the bi-regional Strategic Partnership, established in June 1999 in the framework of the European Union, Latin America and the Caribbean Summits. EuroLat was created in 2006 and meets in plenary session once a year. 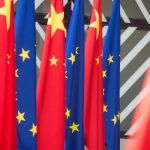 EU-China Summit: Restoring peace and stability in Ukraine is a shared responsibility

EU-China Summit: Restoring peace and stability in Ukraine is a shared responsibility